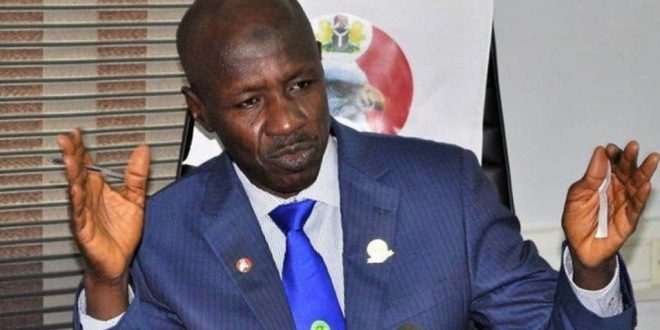 Crack teams from the Department of State Service (DSS) and the Force Criminal Investigation Department (FCID) of the Nigeria Police have begun a manhunt for those behind the recent burgling of the office of the Nigerian Financial Intelligence Unit (NFIU) located at No. 12, Ibrahim Taiwo Street, Aso Villa.

The leadership of the NFIU had appeared before the Justice Ayo Salami-led presidential panel investigating the suspended chairman of the Economic and Financial Crimes Commission EFCC, Ibrahim Magu on July 9 and they asked to provide the transaction history of a Kaduna-based bureau de change (BDC) that was allegedly linked to Magu. The BDC recently transacted businesses worth over N500 billion in different currencies — N336 billion, $435 million, and €14 million.

The NFIU officials told the panel that by their operational protocols and procedure, they don’t go about with such documents. They, however, advised members of the panel to visit their office on Friday morning July 10 to see the documents they requested for.  However, before the panel members got to the NFIU office on Friday morning July 10, some unknown person had broken into their office, went straight to the room where the documents were stored in the computers, and destroyed them all. The burglars also carted away at least seven computers and some sensitive materials.

“At least, six persons were involved. They were caught by a CCTV camera. Detectives are on their trail after watching the footage,” a source said

Magu is being investigated by the panel over allegations of mismanagement and a lack of transparency in managing recovered assets as well as disobeying directives and court orders. He has been in custody since on Monday, July 6 after he was compelled by security operatives who accosted him at the EFCC Annex in Wuse II and escorted him to the Aso Villa where the investigation panel is situated.

A source who spoke to The Sun said the presidential panel has widened its scope of investigation and has invited a former director of finance and more directors of the commission for questioning.

“The former finance director was on secondment from the ministry. His stay at the commission was turbulent as he never had it smooth with Magu. He was ‘bundled’ out of the commission by Magu three days before he was forced out himself.” the source said

The panel has also called for all the files of PEPs (politically exposed persons) and major contractors since Magu took over the leadership of the commission in 2015. Some operatives of the EFCC, who are referred to as ‘Magu boys’ are expected to face the panel today July 13. During their interrogation, they are expected to present files containing details of PEPs. They are also expected to bring files on major projects and contractors.

An investigation into his activities as the commission’s chairman began after the Minister of Justice and Attorney General of the Federation, Abubakar Malami, wrote a letter to President Buhari calling for the dismissal of Magu. Malami in his letter accused Magu of diverting recovered loots, insubordination among other offenses.

Magu has also been accused of failing to give a proper account of 332 out of the 836 recovered real estate property in March, 2018. He is also accused of turning EFCC into a ‘glorified police station.’

Charles Igbinidu is a Public Relations practitioner in Lagos, Nigeria
@https://twitter.com/ionigeria
Previous Former NDDC Managing Director Accuses Akpabio of Sexual Harassment and that She Slapped Him
Next Man’s body found in a bush with his legs and hands tied (graphic photos)