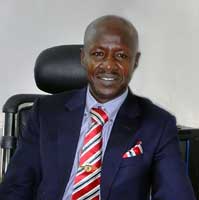 There were indications on Sunday that the All Progressives Congress leaders have met over the crisis between the Presidency and the Senate on the appointment of the acting Chairman of the Economic and Financial Crimes Commission, Mr Ibrahim Magu .
The PUNCH gathered that the party had intervened in the crisis and would declare its position before the end of this week.

A Presidency official, who confided in one of our correspondents , said that those who attended the meeting, which was held at the Presidential Villa, Abuja, on Thursday, included the National Chairman, Chief John Odigie – Oyegun; the Deputy National Chairman , North; Senator Lawal Shuaibu; the National Secretary, Mai Mala Buni; the National Treasurer, Mohammed Gwagwaruwa ; and the National Organising Secretary , Senator Osita Izunaso.

The source, who did not give the details of the meeting, stated, “Our party leaders have met with all the gladiators . I met on Friday with some of the party leaders who attended the meeting . I guess they will be speaking on the outcome soon. ”

The Presidency source also disclosed that it was the Senate President, Dr Bukola Saraki, who contacted the acting President, Prof Yemi Osinbajo, on Tuesday, after the Senate passed the latest resolution on Magu .

According to the Presidency official , Saraki expressed his readiness to attend any fence -mending meeting if there was any.

“To be fair to the Senate President , he was the one who contacted the acting President shortly after their resolution – to express his willingness to attend any meeting organised to find a lasting solution to the matter and he attended , ” the source said.

But a National Assembly source said the meeting between the acting President and the Senate President on Thursday night was at the instance of Osinbajo.

The source said the Senate ’ s resolution on Tuesday compelled Osinbajo to invite Saraki to a meeting.

The source said, “ A meeting took place between Saraki and Osinbajo. The acting President actually reached out to the Senate President after the lawmakers sent a strong signal to the Presidency.

It was learnt that the party leaders were also using ‘back channels’ to reach out to the feuding party members.

A top ranking APC official , who pleaded anonymity in order not to escalate tension, noted that the issue at hand had not yet reached a point where the party would intervene but said it may soon convene a meeting to be jointly attended by the two arms of government.

The source said , “We are intervening to prevent things from getting out of hand. We are using back channels to reach out to the executive and the members of the legislature.

“ We don’t want individuals to take advantage of the situation to advance their personal agenda . Egos are bruised and we must do everything to de-escalate tension.

“ For now , we are reaching out to both parties to get them to avoid making public statements capable of exacerbating the situation; we will take it up from there. ”

The source further explained that the decision of the party ’ s National Working Committee to meet with its governors, at least , once a month had greatly improved relations.

He said the same approach was being adopted to ensure that the party, the executive and the legislature were on the same page on national issues.

When asked if the party ’ s leaders met with the executive and the legislature over the weekend , the APC National Publicity Secretary , Bolaji Abdullahi, in response to a text message on Sunday said ‘ no’.

But a presidential aide , who spoke on condition of anonymity because he was not authorised to speak on the issue, said, “Consultations are still at infancy . There is really nothing to tell at the moment. ”

Abdullahi told The PUNCH on Saturday that contrary to insinuations in some quarters , there was no rift between the executive and the legislative arms of government.

The spokesman, in a telephone interview in Abuja, on Saturday, that what appeared to be a disagreement between the two arms of government presented the nation with an opportunity to strengthen democracy.

Osinbajo had, in an interview in April ruled out the possibility of President Muhammadu Buhari replacing Magu , whose nomination was rejected by the Senate twice.

He had said he aligned himself with the argument of a Senior Advocate of Nigeria, Mr. Femi Falana, that Senate confirmation was not needed for the EFCC chairman based on the provisions of Section 171 of the constitution.

Osinbajo’s statement drew the ire of Senators , who on Tuesday, threatened to withhold all requests for confirmation into executive positions from the Presidency.

Efforts to get the reaction of the Senior Special Assistant to the acting President on Media and Publicity, Mr. Laolu Akande, on the telephone did not yield positive result as of the time of filing this report on Saturday.

Attempts to get reactions from some of those said to have attended the meeting were futile. Calls to the mobile telephone number of Odigie -Oyegun were neither picked nor returned.

He had yet to respond to a text message sent to him on the subject as of the time of filing this report.

Similar calls to the party’s national organising secretary were also not picked nor returned.

A response to a text message sent to him was still being awaited as at the time of filing this report.