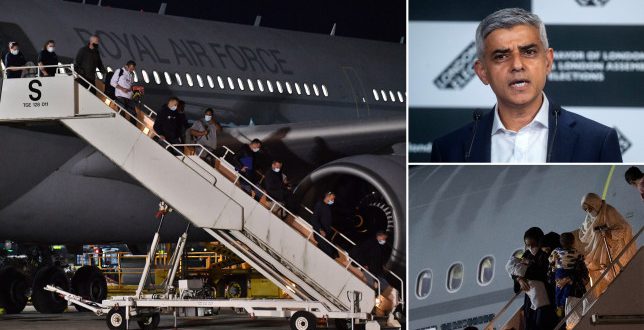 London Mayor Sadiq Khan has announced plans to buy back council homes in order to resettle Afghan refugees forced to flee their homeland when the Taliban took control.

The London Mayor said he will expand his new Right to Buy-back fund to help councils purchase homes which could be used to resettle families arriving from Afghanistan.

Housing associations are also being encouraged to apply for funding for suitable homes that can be delivered quickly.

The scheme will work by councils submitting bids to the Buy-back fund, which allows them to buy former council homes back from the private sector.

The programme will have a particular focus on family-sized homes.

Mr. Khan said: ‘It has been devastating to watch the crisis unfold in Afghanistan and I’m determined to do everything in my power to support those escaping the country.’

‘London has a proud history of providing sanctuary to those in need and by working together we can help these refugees find a welcoming home in our city.’

Mr. Khan announced the Right to Buy-back fund last month in a bid to help councils and council-owned housing companies acquire homes that would be let at social rent levels or used as accommodation for homeless families.

Dr. Nooralhaq Nasimi, director of the UK’s Afghanistan and Central Asian Association, said: ‘With the crisis unfolding in Afghanistan many Afghan refugees will be desperately looking for a safe place to call home.

‘I am proud that the Mayor of London and London councils are leading the way in welcoming Afghan refugees and taking active steps to help accommodate them when they arrive and seek to build new lives in the city.’

The Ministry of Defence says the UK has evacuated almost 7,000 Afghan individuals and their families out of Kabul.

The rescue flights are due to end by August 31 despite fears that thousands of eligible people will be left behind.

The Taliban have warned of repercussions if foreign troops are not gone by then, while security experts have said there is an ‘ongoing and high’ threat of a terrorist attack at the airport.

The Home Office has announced plans to resettle a further 20,000 Afghan refugees over the next five years, but there are no details on how to apply, or how those eligible could leave the country.

The government said that it is working ‘urgently’ to establish a safe route with more details expected ‘in due course’.

Charles Igbinidu is a Public Relations practitioner in Lagos, Nigeria
@https://twitter.com/ionigeria
Previous Man dies after ‘using glue to seal penis  instead of using condom’
Next Cristiano Ronaldo set for Manchester United return after Man City pull OUT of deal