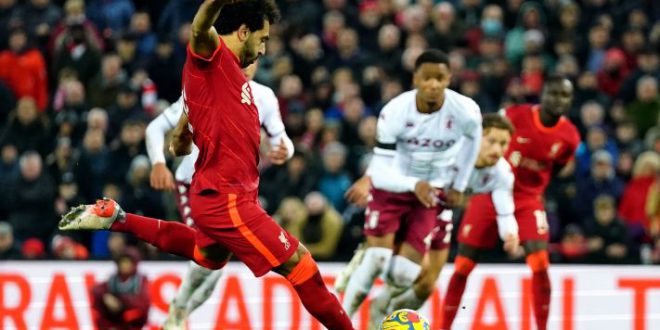 Mohamed Salah made the difference for Liverpool on Steven Gerrard’s return as Aston Villa were beaten 1-0 at Anfield.

Salah won and converted the penalty midway through the second half to secure the three points and maintain the pressure on Premier League leaders Manchester City.

Gerrard, who was making his return as an opposition manager for the first time, set his team up to frustrate and did so for over an hour, but left with only good wishes for comfort.

How Liverpool won it

It was an emotionally-charged atmosphere at kick-off as there was applause for Ray Kennedy, winner of three European Cups at Liverpool, who died last month aged 70.

Thoughts were with Gerrard before and after, greeting the Kop with a shy wave upon emerging from the tunnel and then hearing his name sung loudly in the eighth minute.

But the Liverpool supporters turned their attention to the current players thereafter with Gerrard cast in the role of visiting manager sent to frustrate them. That is what Villa did.

But Liverpool were restricted to half-chances throughout a fiercely contested first half in which three players were booked and many more robust challenges went in.

Jurgen Klopp made one change to his Liverpool side with Alex Oxlade-Chamberlain coming in to replace Diogo Jota who, after picking up a knock against Wolves, was on the bench.

Steven Gerrard made one change to the Aston Villa team that had beaten Aston Villa, Emiliano Buendia dropping to the bench with Matt Targett back in the starting line-up.

Villa were obdurate but, with Ollie Watkins up front, there is pace on the counter-attack too, although it was Ashley Young who almost nipped in when Alisson slipped.

It was well balanced at the break, with the boos that greeted the officials at half-time, an indication that Gerrard’s team were succeeding in making life very difficult.

The pressure was ramped up as Liverpool attacked the Kop in the second half, Virgil van Dijk’s header being tipped over by Martinez before Salah curled just wide.

Klopp sent Diogo Jota on after an hour and he was soon causing problems, his shot being blocked by Tyrone Mings who was doing everything to repel Liverpool.

Even the Villa captain could not cope with Salah. A drop of the shoulder set him away and induced the foul. The Egyptian beat Martinez from the spot and Anfield erupted in noise.

Jota was still hungry and almost doubled the lead after intercepting a back-pass to Martinez. Salah should then have finished it when put clean through by the unselfish Sadio Mane.

There was almost a twist when late substitute Danny Ings came close to capitalising on indecision between Alisson and Joel Matip but was unable to seize upon the loose ball.

Gerrard wanted a penalty as Alisson seemed to catch Ings when he was scrambling to retrieve the situation.

Instead, Villa’s impressive defensive effort brought no reward. And Gerrard’s return became just another Premier League fixture at Anfield in which Salah stole the show.

Memories were everywhere for him here.

Glance to his right and he could envisage the strike against Olympiakos that made Liverpool’s Istanbul miracle possible. Glance to his left and he might recall the left-footed volley against Levski Sofia that sparked his touchline embrace with Gerard Houllier.

Houllier returned here as Aston Villa manager just over a decade ago and waved to the Kop – a move that was badly received among the travelling support. Gerrard had clearly been wary of painting himself as a Liverpool manager-in-waiting on his own return.

In truth, while there was good feeling before and after the game, it was the action that took centre-stage, chants for Gerrard soon being drowned out by chants of Liverpool early on.

The focus of the visiting manager was on his team and he set his side up well, limiting Liverpool to half-chances while the game was goalless as they defended bravely.

The threat on the counter-attack was there but one moment of quality proved the difference. Mings was three-quarters of the way towards the man-of-the-match award. But on an afternoon when Gerrard had a number of special moments, Salah needed only one.