Home / Sport / Football / Lionel Messi arrives in Paris with his wife and their kids to sign his £1MILLION-per-week, two-year PSG contract

Lionel Messi arrives in Paris with his wife and their kids to sign his £1MILLION-per-week, two-year PSG contract

Lionel Messi has arrived in Paris with his wife and children for his medical with Paris Saint-Germain where he will sign a £1million-per-week, two-year deal after leaving cash-strapped Barcelona.

The 34-year-old was pictured at Barcelona airport alongside his wife Antonella and their three children, Thiago, eight, Mateo, five, and Ciro, three earlier on Tuesday. Antonella, 33, later posted a selfie alongside her husband as they sat on their private jet waiting to fly to France.

But the Argentine star touched down later in the afternoon and was pictured waving to the supporters who had gathered to see Messi’s arrival at Paris–Le Bourget Airport.

PSG have posted a teasing clip to their Twitter account, showing six Ballon d’Ors – the amount Messi has won – in front of the Eiffel Tower and a space in the dressing room between Neymar and Kylian Mbappe, who the Argentine is likely to play alongside in attack.

Sources at the French club confirmed Messi’s lawyers had been poring over the contract proposal since Sunday but gave it their approval this morning.

The final points of negotiation were understood to have concerned the six-time Ballon d’Or winners image rights, as well as the breakdown of his wages and various bonuses. 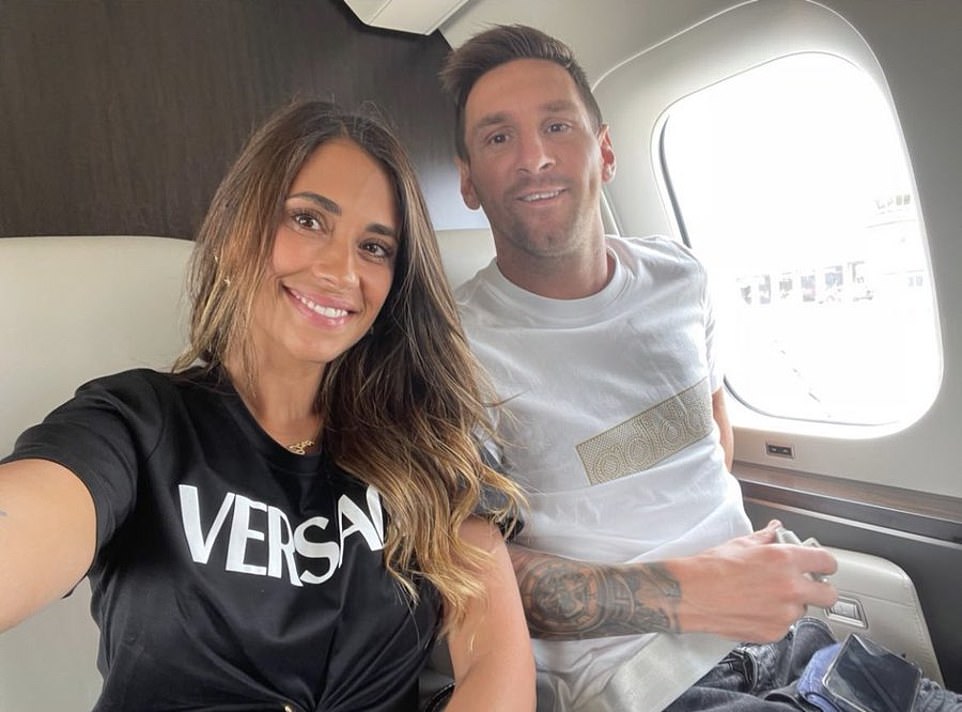 His father, Jorge, today arrived in Paris ahead of his son and fielded questions from reporters having confirmed the deal was done.

Asked who was responsible at Barcelona for allowing their greatest ever player to leave, Jorge Messi replied: ‘You have to ask the club.’

The player’s representatives and Barcelona had earlier moved to dispel reports that the Spanish side made a last ditch bid to keep Messi.

Sources close to negotiations have re-affirmed that Barcelona could not afford to keep Messi even if he stayed for free as, even without him, they are above the wage cap for LaLiga this season. For that reason they did not attempt to persuade Messi to drop his salary. 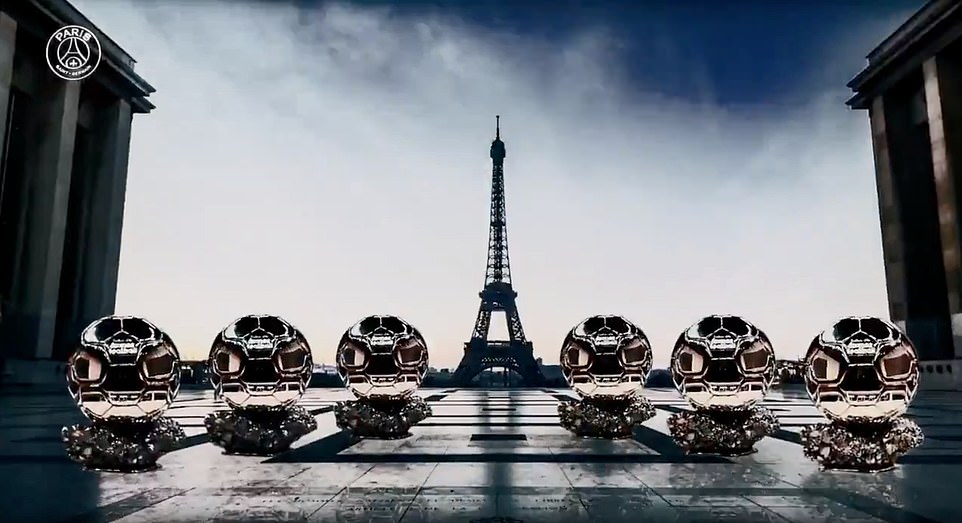 PSG released a teasing video clip on their social media channels, including Messi’s six Ballon d’Ors in front of the Eiffel Tower 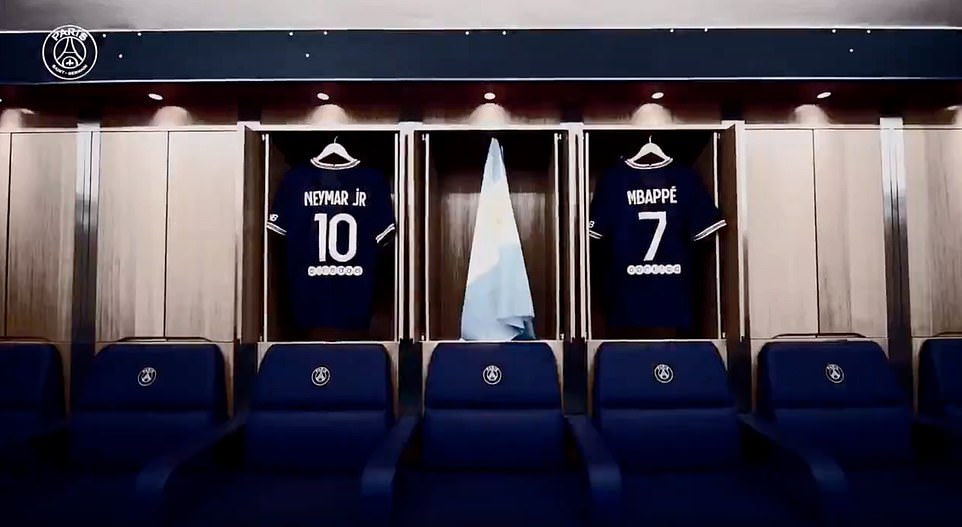 On Sunday, Messi said a tearful goodbye to his club of 21 years which he had joined as child, being signed to the academy and moving from his native Argentina.

He scored 672 goals in 778 appearances but Barcelona were unable to hang onto him after falling foul of financial fair play rules set by Spanish league La Liga.

Barcelona blamed the league but are reportedly in debt to the tune of more than £700 million, meaning that Messi’s contract – even with a 50 per cent pay cut – wasn’t in line with the regulations.

Messi had remained at home in Barcelona awaiting the all-clear to travel to Paris ahead of agreeing a two-year deal, with the option of a third. He was seen leaving his home shortly after 1pm local time to go to the airport. 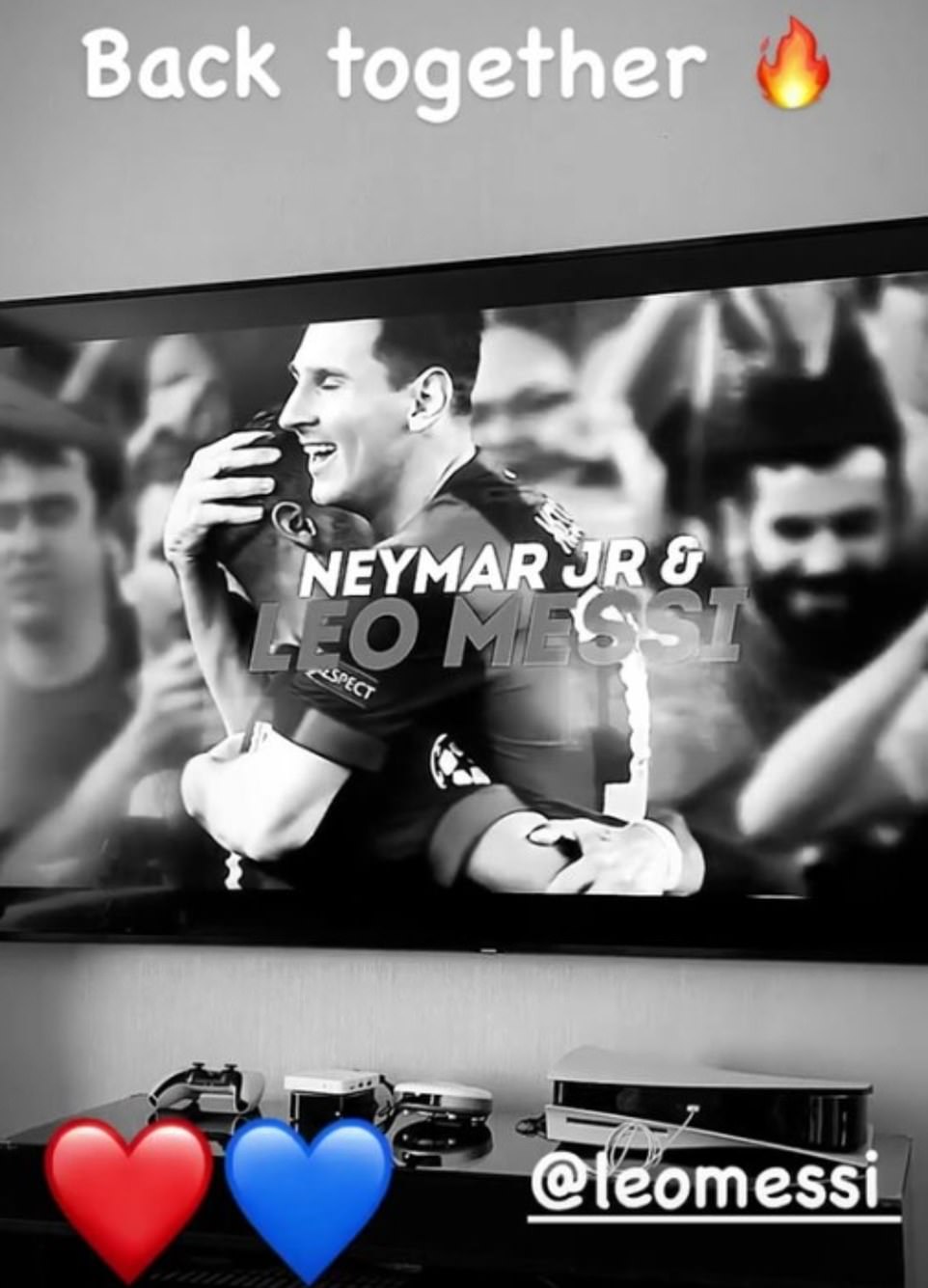 Former teammate at Barcelona, Neymar posted a picture of him and Messi on Instagram earlier with the caption: ‘Back together’ 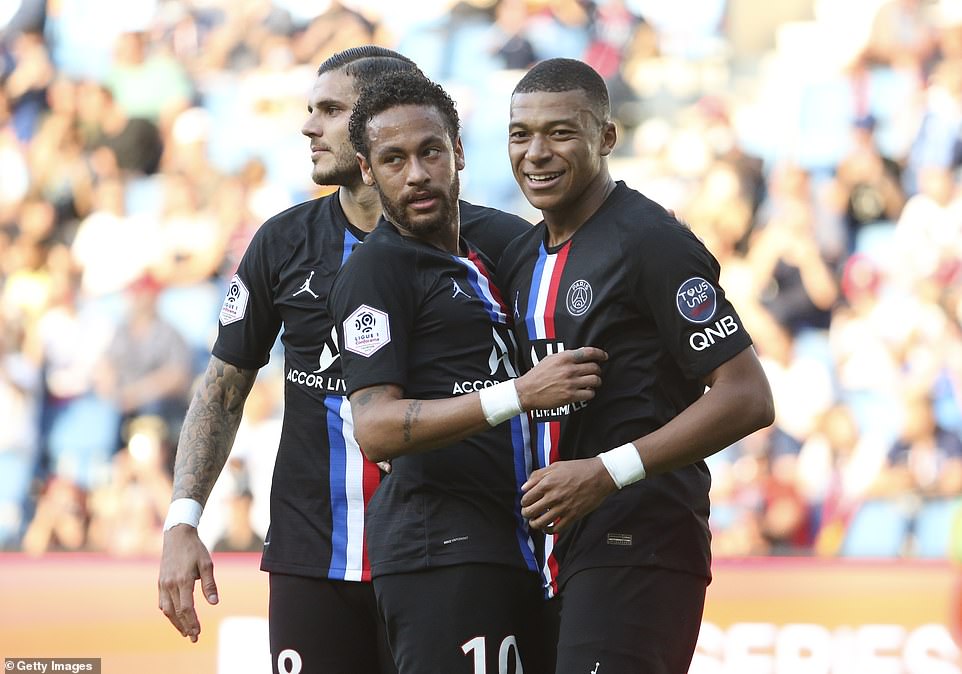 Messi will form a devastating attacking trident alongside Neymar (centre) and Kylian Mbappe (right) in Paris next season
New PSG team-mate Neymar has appeared to confirm Messi will be joining him in the French capital as he posted a photo of them together alongside the caption ‘back together’.

Messi and Neymar have remained close friends ever since the latter left Barcelona for PSG in 2017. The Brazilian star has spoken frequently about his desire to play with the Argentine again one day.

They formed a deadly partnership with Luis Suarez but the MSN trio was broken up when the Brazil star decided to join PSG in the summer of 2017 for a record €222 million (£187m) fee.

His pending arrival comes at a time when French clubs are reeling from failed TV deals which has impacted revenue.

It is hoped Messi’s presence will stimulate new negotiations with interested TV companies to benefit clubs across the French league. 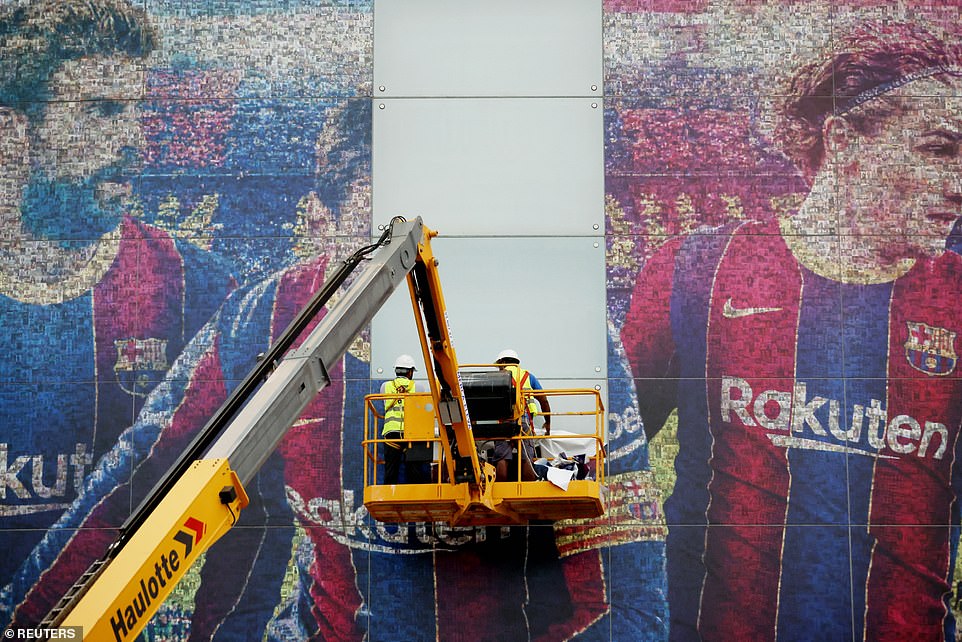 Lyon president Jean-Michel Aulas, talking to L’Equipe, explained how it could lead to an increase in income from BeIN’s overseas rights deal.

He said: ‘If this is confirmed, it’ll be fantastic for us all. For the TV rights and the general marketing value of Ligue 1, it would undeniably be a plus.

‘This time, with Messi, you can’t imagine that in a transparent context the broadcasting rights sold by BeIN abroad wouldn’t explode.

‘I am very confident. If this transfer goes through, with Neymar and Mbappé there, we are in a favourable position.

‘If Qatar take the initiative to build a great team at PSG, we’ll all be happy – even if it makes the competition more difficult.

‘But you need the other clubs, at least the ones going for European places, to have the means to sign players like Messi.

‘In that case, we would become the number one league in Europe. For that to happen, BeIN has to be positive with the international rights to develop them even further.’ 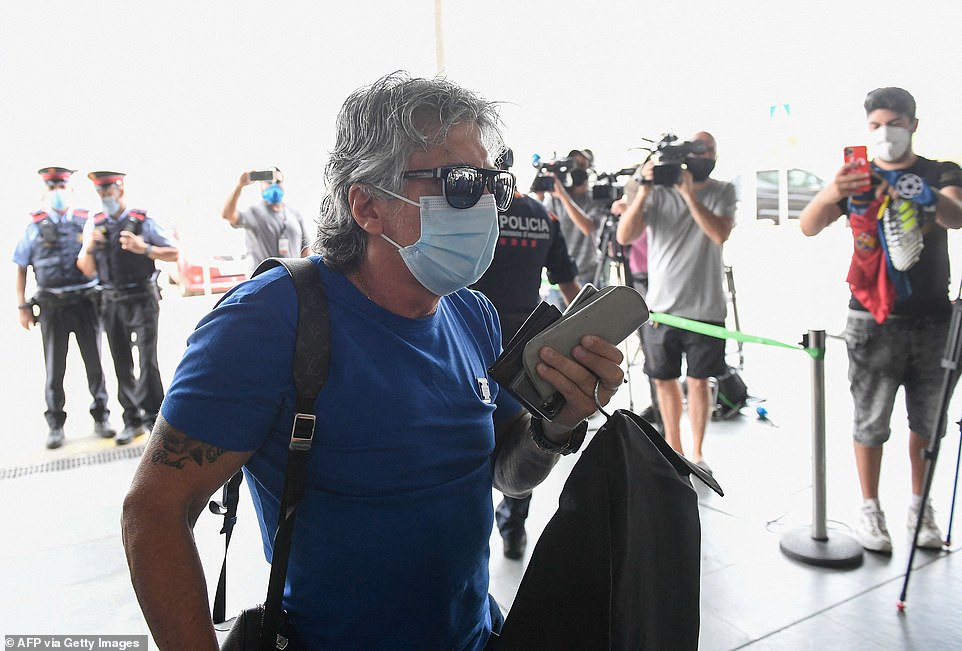 Messi’s father, Jorge, was central to the negotiations on behalf of his son’s PSG switch but was left bemused at Barcelona 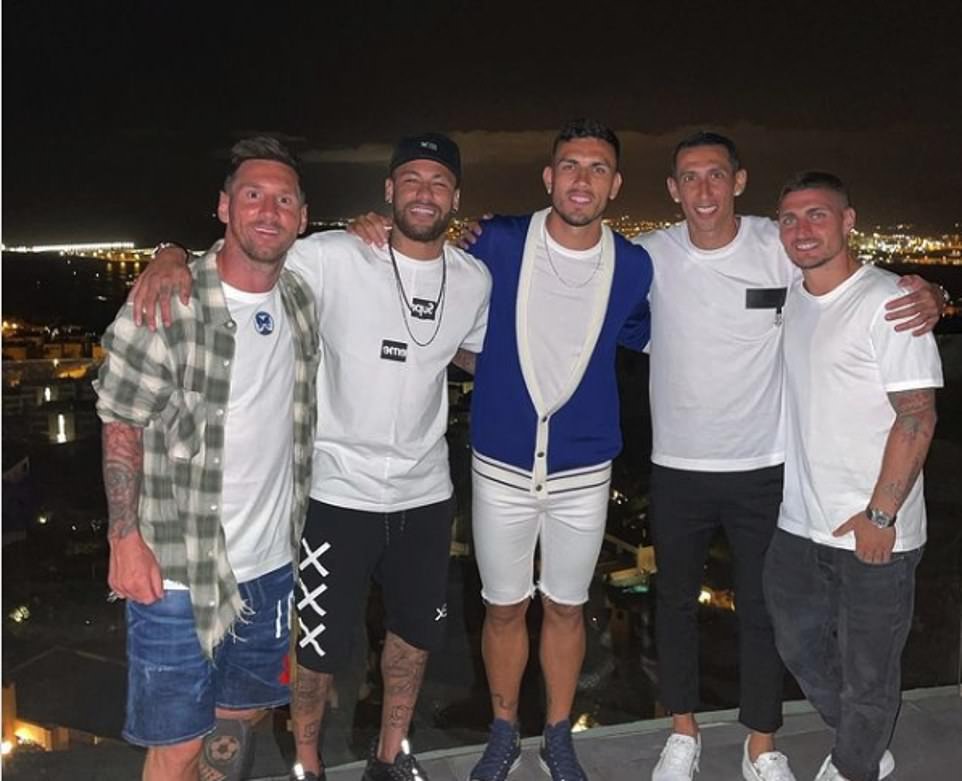 Charles Igbinidu is a Public Relations practitioner in Lagos, Nigeria
@https://twitter.com/ionigeria
Previous Tiger Woods sue ex-mistress for breaking $8 million Non Disclosure Agreement by speaking about their affair
Next Raphael Varane arrives at Manchester United’s Carrington training base for his medical ahead of £42m switch from Real Madrid