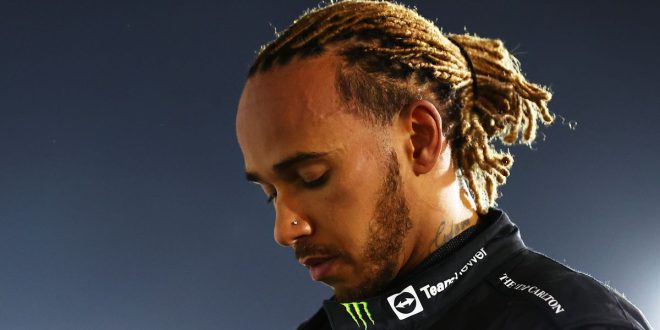 Seven-time Formula 1 world champion Lewis Hamilton has suffered issues with his Mercedes car bouncing at high speed, but he has now been told to suck up the pain or give up his seat

Lewis Hamilton has been told to “step aside” from his Mercedes seat if he continues to complain about his car.

The seven-time world champion has seen his Mercedes battle with a porpoising issue, where the car bounces at high speed, for much of the season. The Silver Arrows have so far been unable to solve the problem, with Hamilton left clutching his back in agony following the Azerbaijan Grand Prix.

Hamilton has made no secret of his unhappiness with his car this year, with team boss Toto Wolff admitting that it is a “s***box”. But former McLaren and Red Bull driver David Coulthard believes that Hamilton should suck up the pain as he prepares for next weekend’s British Grand Prix.

“Those that are struggling more are of course going to be more vocal than those that are getting results. Everyone got the same set of technical regulations handed to them. I’ve been in the situation where I’ve had the advantage of my team doing a better job and I’ve been on the other side where the team hasn’t done such a good job,” Coulthard said.

“I think we have to keep in perspective that sport doesn’t come with princess in the pea mattresses. If you’re a boxer, you have to accept someone’s going to punch you in the face, if you’re a footballer someone’s going to drag their studs down the back of your legs. So I think we have to keep in perspective a little bit that this is where certain teams are and there will be evolution, but for the most part, just get on with it.”

Hamilton’s problems have left him a lowly sixth in the world championship standings, 34 points behind team-mate George Russell. This is Russell’s first year at Mercedes following three seasons at Williams, but Coulthard does not believe the current campaign is reflective of the duo’s talents.

“In my mind’s eye and it remains to be seen as and when Mercedes deliver a championship the faster the car, the more difficult it is to drive. The further you are away from the peak of downforce then everything just isn’t running as close to the limit,” Coulthard added.

“So what tends to happen if you’re in a really fast car, the exceptional drivers get more out of it. And when you have an average car, it’s easier for everyone to get something out of it. I think George is a future world champion, is a fantastic driver and has earnt that place in the team.

“That’s why right now, you go ‘oh George is outperforming Lewis’, well let’s wait and see when they qualify first and second, in whatever order they happen to be, let’s see what the order is then.”