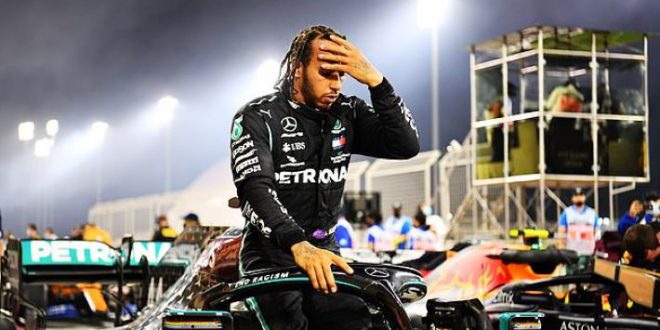 British Formula One star Lewis Hamilton was inches from tragedy at the Italian Grand Prix as title rival Max Verstappen’s car flew over his head after they took each other out of the race.

Verstappen’s Red Bull launched off a ramped curb at Monza and onto the top of Hamilton’s Mercedes, with only the protective Halo device preventing the reigning world champion from serious injury.

The Red Bull went nose-first into the gravel with both drivers emerging from the carnage unscathed in the latest dramatic twist in an increasingly heated world championship duel.

Verstappen didn’t hang around to check on the condition of Hamilton, instead storming off to the pit lane having ranted to his team via radio, with the British driver emerging from the cockpit of his car a few minutes later.

The two drivers both accused the other of being in the wrong after the race, with Hamilton saying Verstappen ‘knew what was going to happen, but he still did it.’

Verstappen responded by saying he had ‘nowhere to go’ and blamed Hamilton for not giving him the room he needed to negotiate the corner. 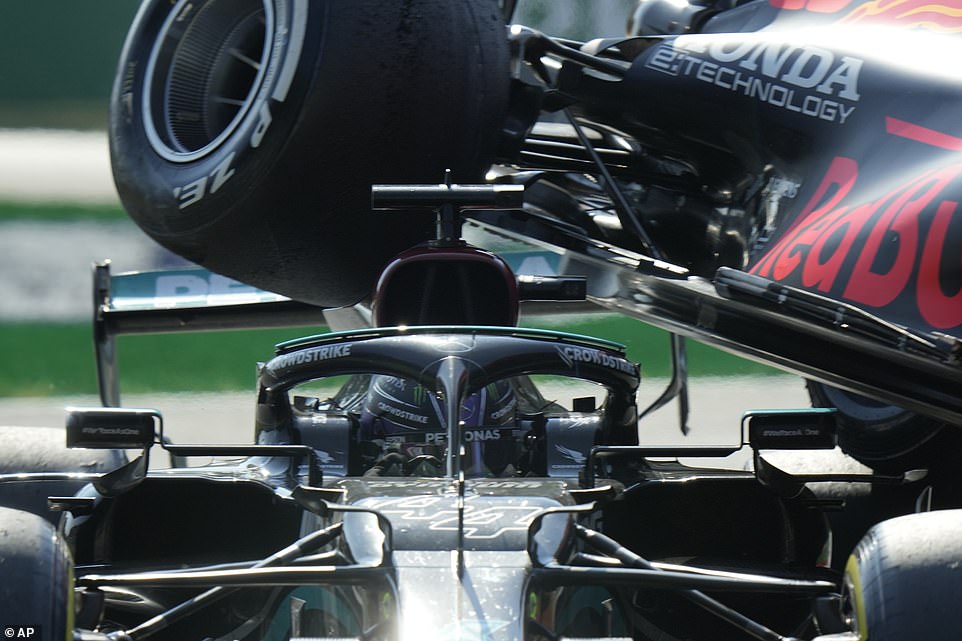 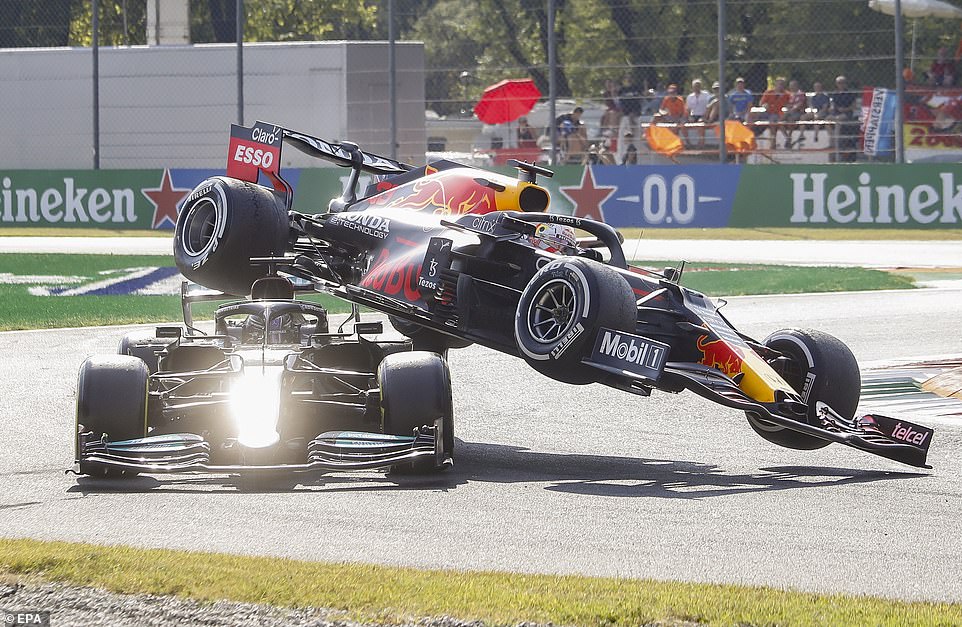 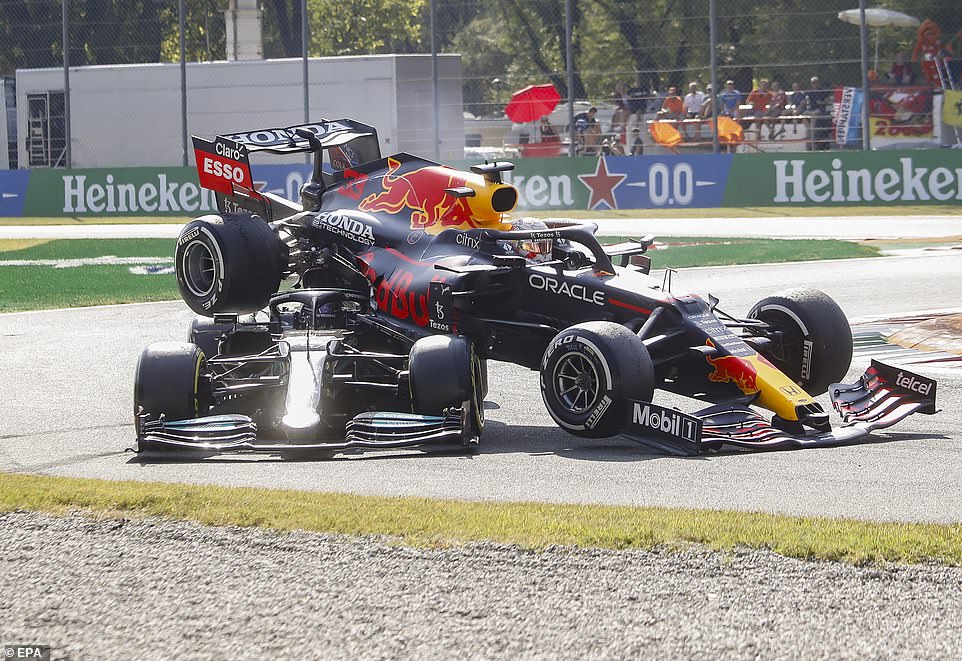 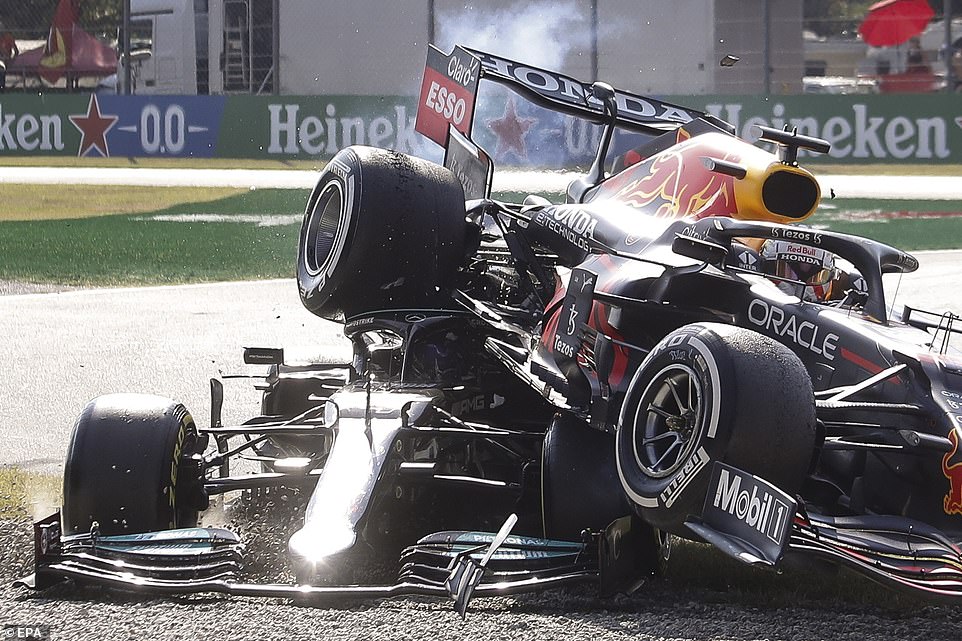 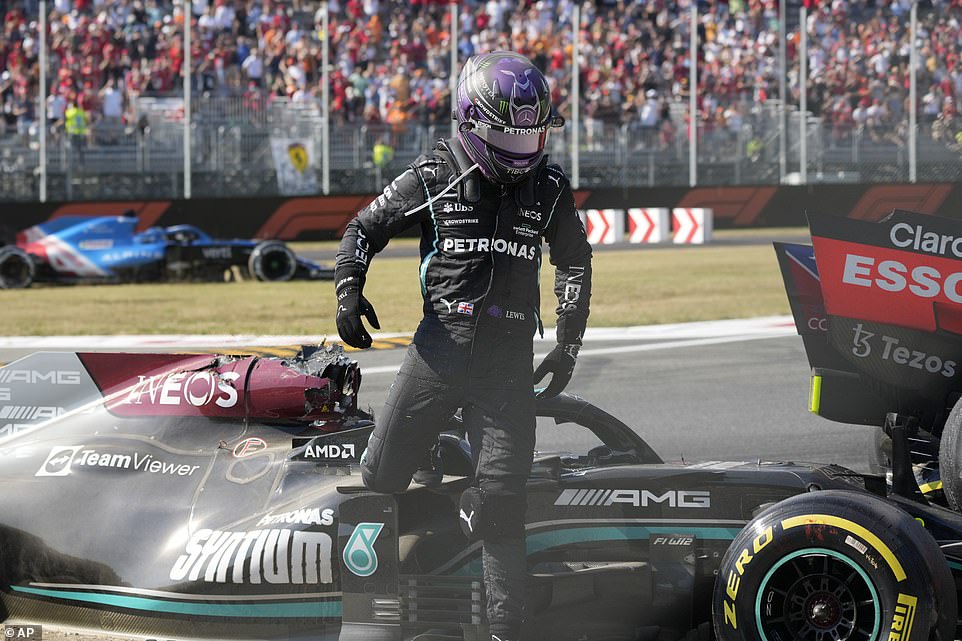 The dramatic moment happened on lap 26 of 53 at the Italian circuit. As Hamilton left the pit lane, Verstappen drew up alongside him and they duelled for position at the Variante Del Rettifilo chicane.

Dutch driver Verstappen ran wide and the raised kerb launched his Red Bull into the air, with the rear of the machine landing on top of Hamilton’s Mercedes, which had been forced off the track.

Verstappen’s car also ploughed into the gravel trap at the side of the track, with the back of his Red Bull left resting on Hamilton’s car.

In a clear sign the incident – the second of the season after they collided during the British Grand Prix at Silverstone, sending Verstappen into the tyre wall – will do little to cool tensions between the pair, Verstappen stormed off without checking on Hamilton’s wellbeing.

‘That’s what happens when you don’t leave any room,’ Verstappen said via radio to his Red Bull team as he exited his car and walked back to the pit lane.

Hamilton lifted himself out the cockpit of his Mercedes a few minutes later to make the same walk. 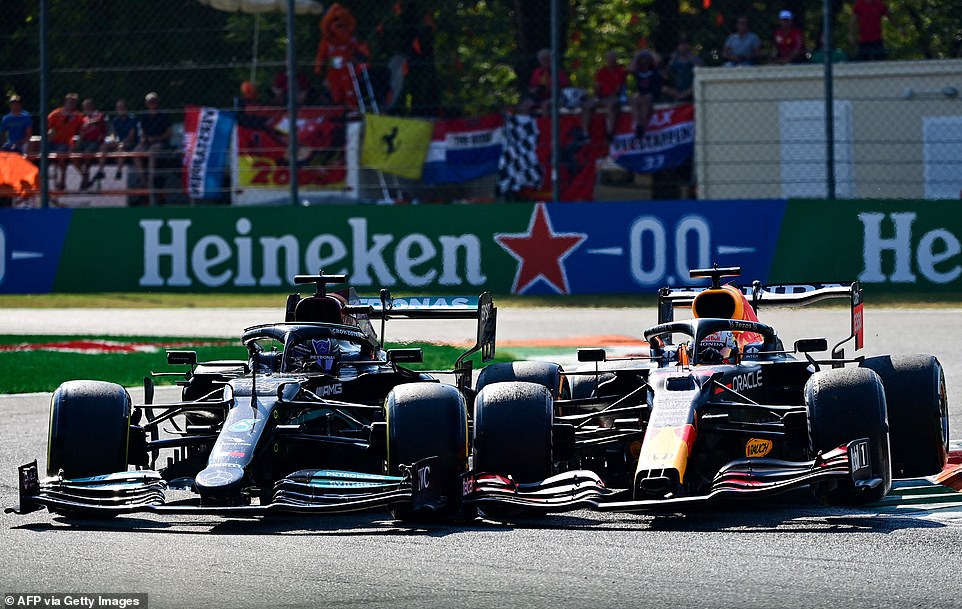 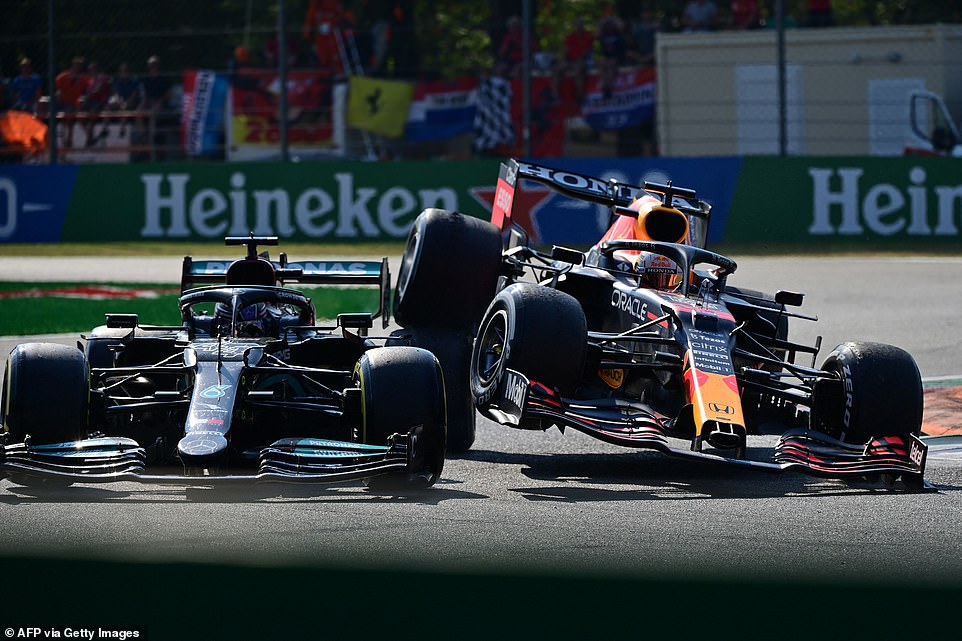 Wheel-to-wheel, the two drivers refused to give an inch with Verstappen forced wide to mount a ‘sausage ramp’ on the curve 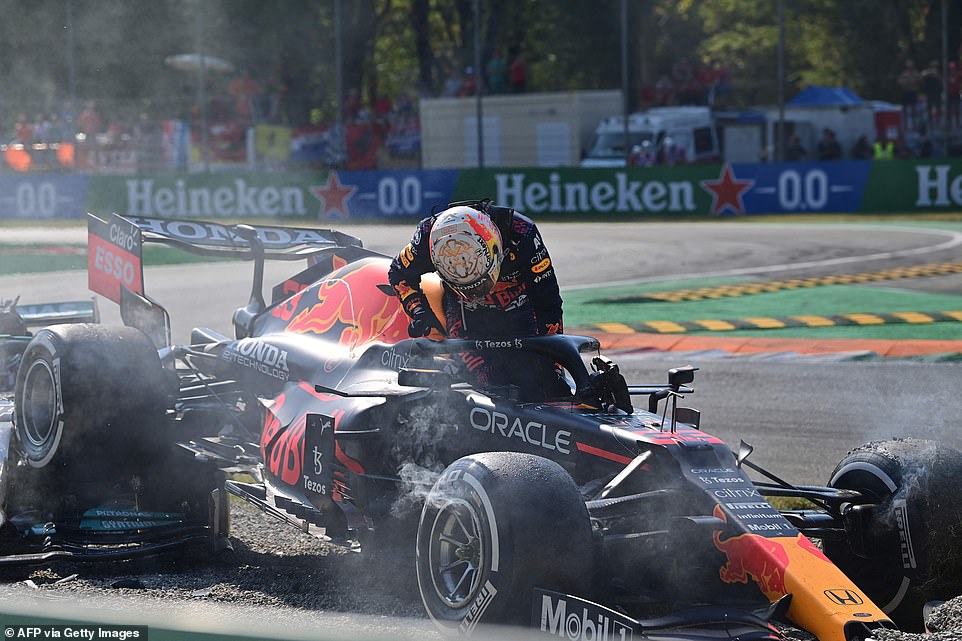 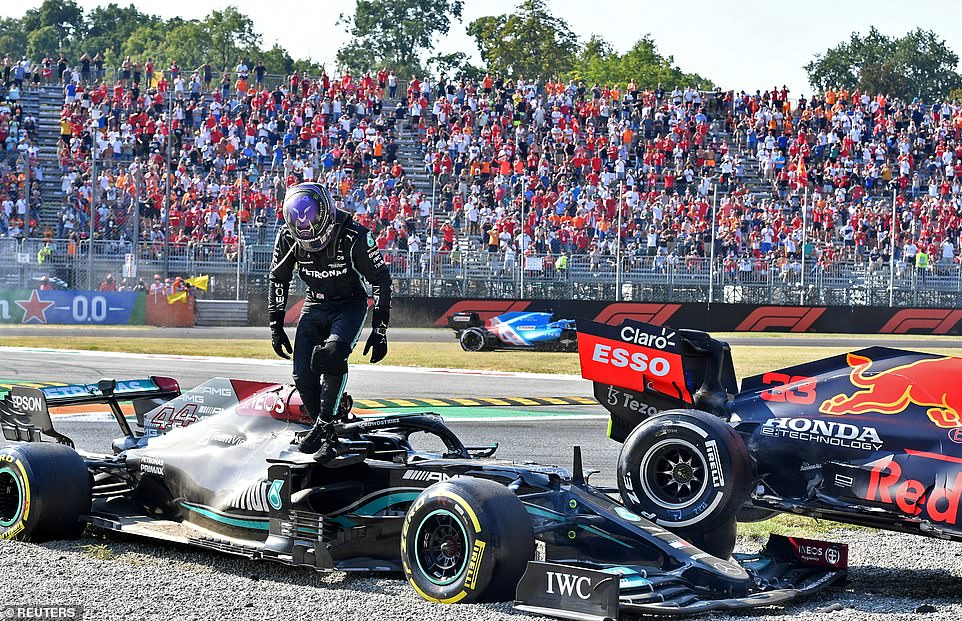 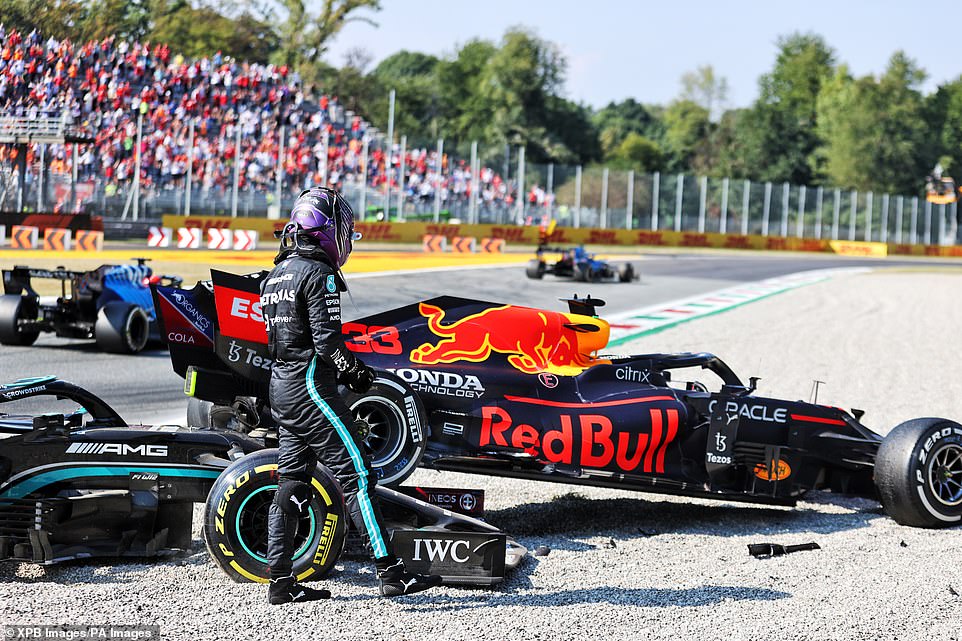 The Briton was almost certainly saved from serious injury by the Halo safety device, a titanium bar placed above the driver’s head that has been mandatory in Formula One since 2018.

Replays showed Verstappen’s car bouncing off the Halo with Hamilton unable to do little else than duck out the way as the Red Bull’s wheels and rear chassis flew before his eyes.

The two drivers must await an investigation by race stewards after the race to determine whether they will be penalised.

Speaking to Sky Sports after the race, Hamilton said he was feeling stiff and had some soreness in his neck.

He added: ‘Just from what I remember, I was racing as fast as I could, I was in the lead time wise, they fitted me, the pitstop was slow and I lost a couple of seconds. I came out, I saw Max was coming, I left a car’s width, was ahead going into turn one, ahead in turn two, then he’s on top of me.

‘He just didn’t want to give way today, he knew going into turn two what was going to happen, going over the kerb, but he still did it. We will talk to the stewards but I don’t know what to say.’ 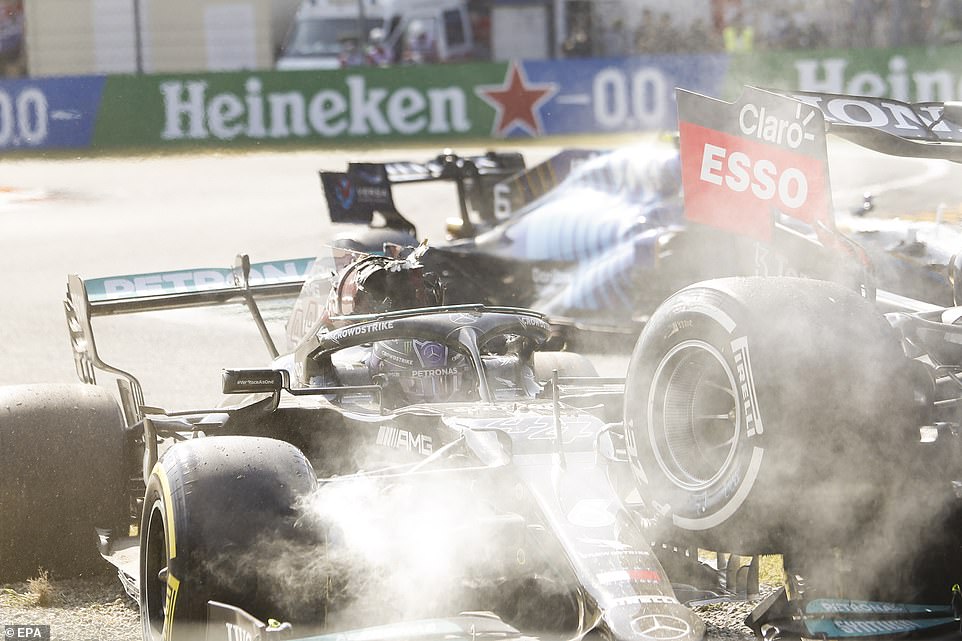 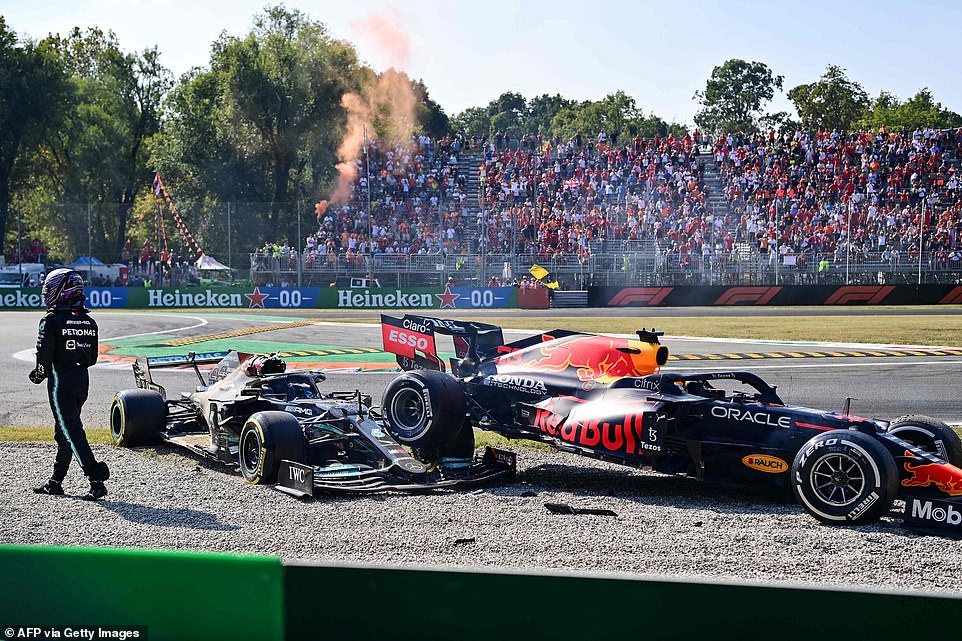 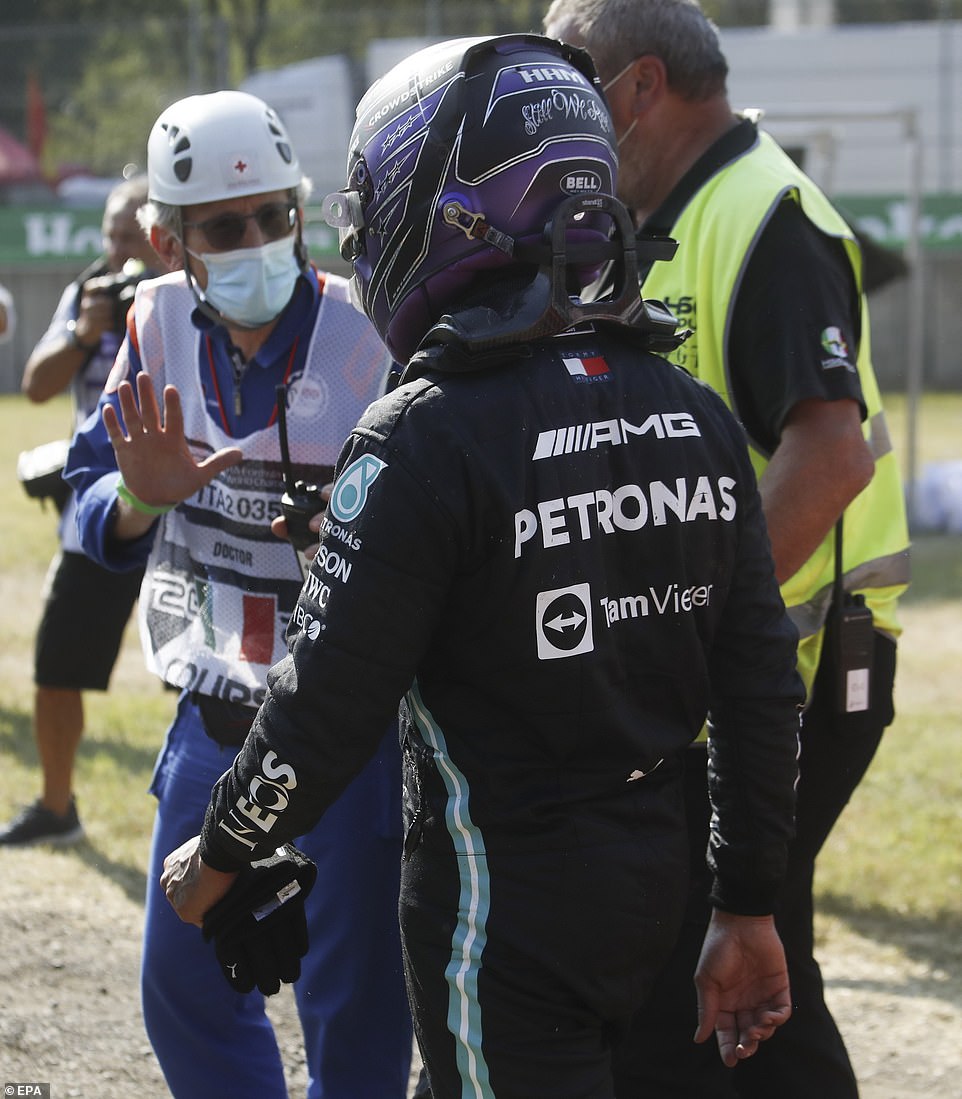 Verstappen replied: ‘We realised it was going to be close into turn one, we cut across and I had to go onto the green part. He realised I was going for it, he kept on squeezing me, I wanted to race.

‘I didn’t expect him to keep on squeezing, if he’d given me a car width we would have raced out of turn two. Then there was nowhere to go, he pushed me onto the sausage kerb, we touched. He kept on squeezing as I was alongside him.

‘You need two people to work together to make the corner, we were fighting for position and unfortunately, we touched. If one guy is not willing to work, what can you do? It’s not going to happen.

‘It is very unfortunate what happened today, nobody likes to see that but we are professional enough to step over and keep going.’

He told Sky Sports: ‘The stewards are going to decide who is predominantly to blame. In football you call it a ‘tactical foul’. (Verstappen) probably knew if Lewis stays ahead, that is the race win, possibly.

‘If you compare it to what Lewis said about turn four on lap one, there was no space left – pushed off the track, actually.

‘Let the stewards make the judgement. I don’t want to be a punter like some of my colleagues.’

Wolff continued: ‘The incident where they actually crashed, it was clear for Max in there that it would end up in a crash.

He then agreed it was a ‘fantastic’ advert for the halo, adding: ‘If you see the car, the whole thing is damaged over the halo and the wheel was on Lewis’ head.’

Red Bull boss Christian Horner said: ‘Max had the momentum and Lewis gave him enough space in turn one but our opinion would be that he didn’t give him enough in turn two.

‘Most important thing today is that the halo has done it’s job because it’s an awkward accident, thank god no one was hurt.

‘I think Max had earned the right to be given more space to work with in turn two but I think you could look at this as a racing incident.

‘To portion blame to one side or the other, I think for this incident in particular that’s very difficult to do.’

The Australian driver Daniel Ricciardo, of McLaren, went on to win the race, which ran behind a safety car for a few laps after the crash.

With both drivers failing to score any championship points at Monza, Verstappen maintains his five-point lead over Hamilton with 226.5 points to 221.5 with eight races left in the season.

The two drivers were also embroiled in a blame game after their crash at Silverstone back in July.

Verstappen was taken to hospital for checks after a collision of tyres on the first corner saw his Red Bull sent spinning across the gravel and into the tyre wall.

Hamilton was punished with a 10-second penalty during the race but Verstappen said that ‘was not severe enough for what he caused.’ 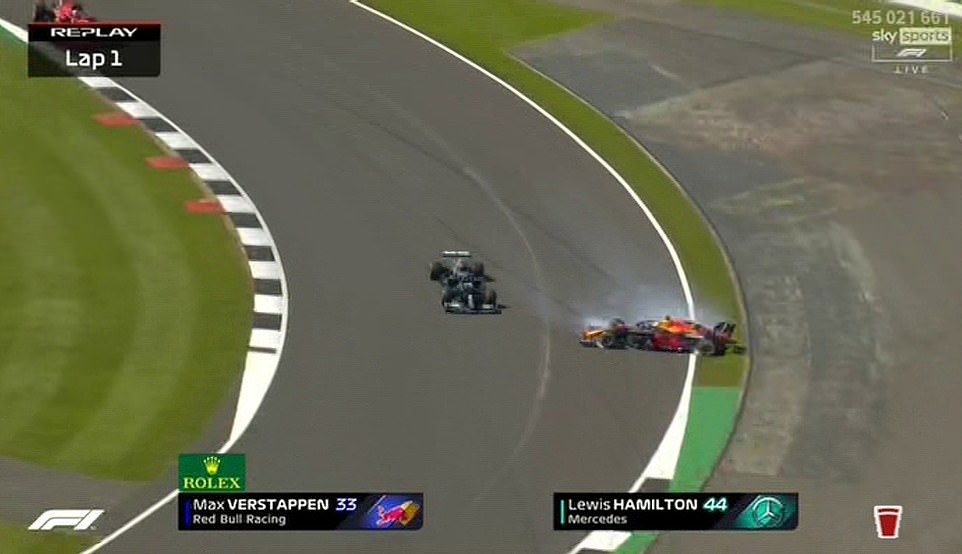 At the British Grand Prix in July, Hamilton and Verstappen collided at the first corner, sending the Dutchman spinning off 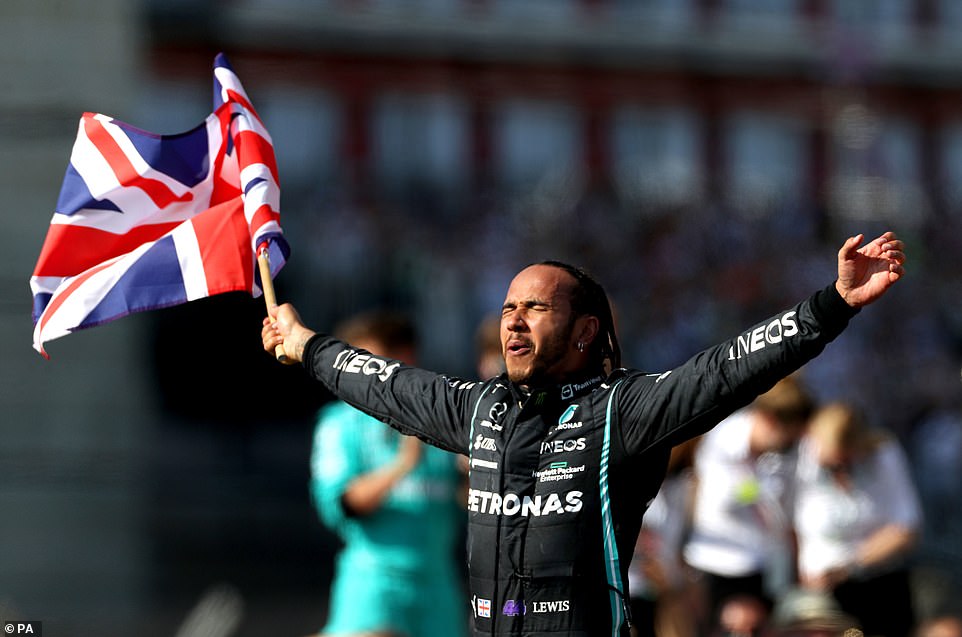 Hamilton went on to win the race at his home circuit but Verstappen claimed his celebrations had been too exuberant while he was still in hospital following the crash.

‘[It is] disrespectful if one guy is in the hospital and the other one is waving the flag around like nothing has happened while you push the guy into the wall with 51G,’ said Verstappen the following week.

‘Not only that, just the whole reaction of the team besides that. That’s not how you celebrate a win, especially a win how they got it.

‘That’s what I found really disrespectful and in a way it shows how they really are, it comes out after a pressure situation. But I wouldn’t want to be seen like that.’