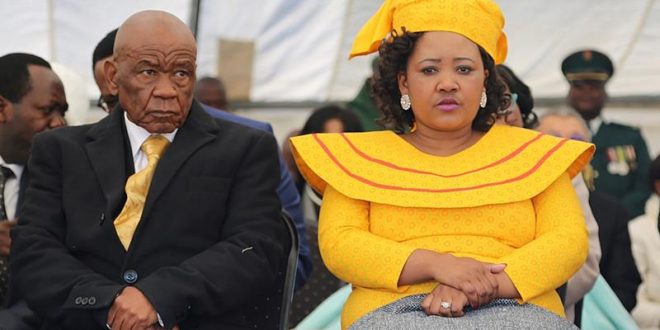 Maesaiah Thabane, the 42-year-old first lady of Lesotho, the mountainous African nation that is completely encompassed by South Africa, turned herself in to police Tuesday for the 2017 murder of Lipolelo Thabane, the country’s former first lady and the estranged wife of the 80-year-old sitting prime minister, Thomas Thabane.

According to the Associated Press, Maesaiah Thabane fled the country last month after she was ordered to report for police questioning in connection with the death of Lipolelo Thabane, who was mysteriously shot to death in 2017 only days before the prime minister’s second inauguration.

At the time of the Lipolelo Thabane’s death, Maesaiah Thabane was in an odd predicament: During 2015, the country’s court had ruled Prime Minister Thomas Thabane, despite having filed for divorce in 2012 against his estranged wife on the grounds of “malicious desertion,” was still legally married to her pending legal challenges put fourth by Lipolelo Thabane, reports the Lesotho Times.

As such, Lipolelo Thabane was still technically the real first lady, and Maesaiah Thabane was not legally entitled to any government benefits, reports the news outlet.

In the ruling, Judge Molefi Makara prohibited Maesaiah Thabane from “performing any functions and exercising any rights vested” in the office of the first lady, and from receiving any government compensation, including access to a chauffeur, bodyguard, and healthcare, reports the news agency. Furthermore, any government benefits were to be directed to the prime minister’s estranged wife until the divorce case had been settled.

Mokete Paseka, the deputy commissioner of police, announced Tuesday that the first lady, who voluntarily turned herself into authorities, would be held in custody until formal charges were drafted, reports the news agency. Authorities had previously questioned Prime Minister Thabane himself, alleging that his cell phone was in contact with an undisclosed person who was near Lipolelo Thabane at the time she was killed.

The first lady’s arrest comes amidst Prime Minister Thabane’s recent acknowledgment that he no longer has the energy to rule the country, and as such, plans to retire soon. His own party had previously called on him to leave office last July.

In 2014, Prime Minister Thabane fled to South Africa amidst concerns that an army coup was threatening his life after he ousted a military leader.

“I have been removed from control not by the people but by the armed forces, and that is illegal,” Thabane told the BBC from neighboring South Africa. “I came into South Africa this morning and I will return as soon as my life is not in danger. I will not go back to Lesotho to get killed.”

According to Reuters, the military denied staging a coup, but acknowledged making a strategic move against the police, who support the prime minister, for allegedly plotting to give weapons to a regional political faction.

Thabane returned to Lesotho shortly after the military disruption with a South African official to help resolve the conflict.