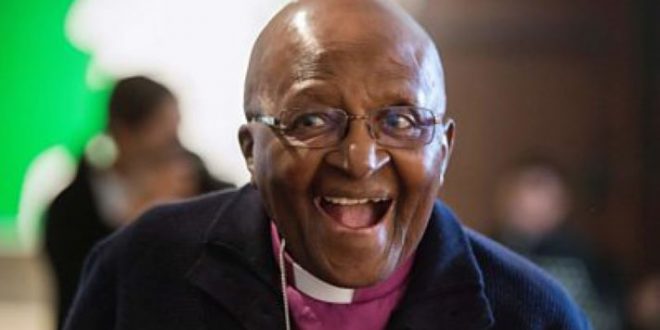 Anglican Archbishop Desmond Tutu, South Africa’s ebullient apostle of racial justice and reconciliation who won the Nobel Peace Prize for his struggle against the system of White domination known as apartheid, died Sunday in Cape Town. He was 90.

The cause of death was complications from cancer, according to Roger Friedman, spokesman for the Archbishop Desmond Tutu Intellectual Property Trust. Archbishop Tutu was diagnosed with prostate cancer in 1997, and he was hospitalized on several occasions in recent years to treat infections associated with his cancer treatment.

A small, effervescent man with a crooked nose and infectious toothy grin, Archbishop Tutu served as Black South Africa’s informal ambassador to the world during the dark days of repression and as a crucial voice in the campaign for racial equality that culminated with Nelson Mandela’s election as the country’s first Black president in 1994. Throughout the struggle, he preached nonviolence even while denouncing apartheid as “an evil system.”

After the fall of apartheid, Archbishop Tutu chaired the controversial Truth and Reconciliation Commission, which sought with mixed success to heal the wounds of the apartheid era. He went on to become an international spokesman and campaigner for human rights around the world.

Archbishop Tutu explained his devotion to social justice in religious terms, saying his Christian faith demanded that he speak out for the underdog and the oppressed. He also believed that South Africa, with its unique combination of the developed and developing worlds, was a “rainbow nation” and microcosm of global issues, including race and poverty. “Once we have got it right,” he said, “South Africa will be the paradigm for the rest of the world.”

Desmond Mpilo Tutu, the son of a schoolteacher and a laundress, was born Oct. 7, 1931, in a small gold-mining town in the Transvaal, the South African heartland. He wanted to become a doctor, but his family could not afford medical school.

After graduating from the University of South Africa in 1954, he followed in his father’s footsteps by teaching high school. He abandoned teaching as a career after the White-minority government, as part of its crusade to codify White superiority, passed the Bantu Education Act, consigning Blacks to poorly funded, second-rate schools.

Archbishop Tutu next chose to study for the Anglican priesthood, inspired in part by Bishop Trevor Huddleston, who one day tipped his hat to Archbishop Tutu’s mother when he passed her on the street.

“I couldn’t believe my eyes,” Archbishop Tutu once told Washington Post journalist Steven Mufson for the book “Fighting Years: Black Resistance and the Struggle for a New South Africa,” “a White man who greeted a Black working-class woman.”

Huddleston, a vocal opponent of apartheid whom the government later expelled to his native Britain, became Archbishop Tutu’s spiritual mentor as well. The Anglican Church, a small but influential religious community within South Africa, welcomed to its ranks the articulate young Black clergyman.

After earning a bachelor’s in divinity and master’s degree in theology from King’s College, in London, Archbishop Tutu spent years teaching in South Africa and working in England as an administrator with the Theological Education Fund, which administered scholarships funds for the World Council of Churches.

He was named the first Black Anglican dean of Johannesburg in 1975, bishop of Lesotho one year later and general secretary of the South African Council of Churches in 1978.

He used the council position to become a high-profile spokesman for racial equality and nonviolence. As Black unrest spread throughout the country beginning in 1984, his offices at Khotso House in downtown Johannesburg became the nerve center for the liberation movement, housing a host of anti-apartheid organizations, including trade unions and grass-roots community organizations.

For his efforts, he was awarded the Nobel Peace Prize in 1984. Government officials, who conducted a smear campaign, accusing him of being a secret communist, reluctantly allowed him to attend the event in Oslo. He began his address characteristically, by citing the recent killings of a 6-year-old Black child by security forces and a White baby by Black rioters. Both deaths, he said, “are part of the high cost of apartheid.”

Violence on both sides was wrong, he told his distinguished audience. But, he added, “the primary violence is that of apartheid, the violence of forced population removals, of inferior education, of detention without trial.”

Even during that solemn event, Archbishop Tutu couldn’t help making a joke: A Zambian boasts about his country’s minister for naval affairs to a South African, who points out disparagingly that landlocked Zambia has no navy. The Zambian replies, “Well, in South Africa you have a minister of justice, don’t you?”

Archbishop Tutu was more than a just a spiritual cheerleader for the anti-apartheid movement. There were times when he angered his fellow activists by opposing violence committed in the name of Black liberation just as vehemently as he denounced state-sanctioned violence.

When anti-apartheid activists began targeting for death purported government collaborators, Archbishop Tutu several times waded into angry mobs of demonstrators to rescue alleged informers. In the impoverished Black township of Duduza east of Johannesburg in July 1985, he and a fellow Anglican bishop, dressed in purple robes, pulled to safety a man alleged to be an undercover policeman at a funeral for four young men killed in political violence. The crowd had yanked the man from his car, set it on fire and sought to drag him on top of it to form a “funeral pyre” in vengeance for the four deaths.

In the nearby township of Daveyton, even while openly defying the government’s ban on political funerals, Archbishop Tutu interposed himself between Black mourners and hundreds of heavily armed soldiers to prevent a violent confrontation. Then, as always, he couched his political actions in the spirit and tradition of the Bible. “I don’t want to go to jail,” he told the crowd. “But if I am to go to jail for preaching the gospel of our Lord Jesus Christ, then so be it.”

Archbishop Tutu’s personal courage and adherence to nonviolence won many accolades abroad, but at times alienated Blacks in South Africa. In February 1986, he intervened to end three days of violent clashes in Alexandra township outside Johannesburg by pledging to take grievances to President P.W. Botha.

When Botha refused to meet with him, he returned empty-handed and was booed when he addressed a crowd of 45,000 at Alexandra stadium. He later confessed that if he were a young Black man, he wouldn’t follow his own preachings, according to Mufson’s book.