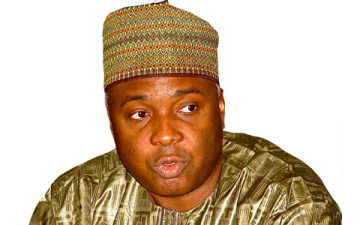 My Leaving Rumours A Publicity For PDP – Saraki

President of the Senate, Dr Bukola Saraki, said contrary to insinuations, he was a full member of All Progressives Congress and remained there “body and spirit’’.

Saraki said at a Forum in Abuja that the speculations were part of the mischievous activities against him and urged the public the discountenance them.

He said that those spreading such information were doing so as propaganda for the Peoples Democratic Party.

Saraki, however, blamed the development on inactivity in the APC, saying that the party’s leadership had failed to focus it properly.

He, therefore, charged the National Executive Committee of the party to wake up to its responsibility as it had remained without activities for too long.

The president of the senate said that the docility in the party was giving room for unfounded allegations against some of its members.

According to him, if the party had organised regular NEC meetings and other caucus meetings, there would have been enough activities to determine who the true members are.

“I think there is no APC member that will tell you he is happy with the state of affairs of the party; there is a lot of work that we need to do.

“The party that hasn’t met for a long time, it’s beyond comprehension and I think that we should all quickly put that in order and start to get NEC, caucus and others going.

“We need to start early to get the drive in the party back.

“Luckily, in spite of the lack of meetings here and there, if you go round the 36 states, it is in just few states, not many states, where you may see internal crises.

“It’s not that the party, at the grassroots level, had a lot of crisis here and there; it’s just for the administrative aspect and the national executive to provide leadership.’’

Saraki also said that if there had been meetings of the party, his detractors would have seen how actively involved he was in the party “and will not have any room to spread such lies’’.

“If the party goes back to what we all know that every month, we hold NEC meeting, you have caucus, they will stop all these `spirit’ and no `spirit’ thing.

“It is not that they have had a meeting and you didn’t see me, and then, you can say that yes, my spirit is not there.

“I can’t call a meeting of the party. I have expressed my view and the responsibility of calling a party for a meeting is that of those who we elected as party officials” he explained.

On the allegation that his emergence as president of the senate was an affront to the party, Saraki said that he had kept the wishes of the party, including zoning of senate president’s position.

He stated that at the last meeting of the party held over zoning of national offices, the position of president of the senate was zoned to the North-Central.

“It was after that the party started to do different things, shifting its position.

“The point I’m making is that that’s over two years ago; two years now, is that the reason why the party cannot hold meetings?

“My own point is that the executive of the party just needs to wake up and start managing the party.

“There is no day when I see the party chairman that I don’t tell him, `Mr Chairman, we must put the party in focus’.

“The rules of the party also give you room by which you can call a meeting, but I think we have not got to that point yet.

“I think we should do it in a smooth manner, but what I want to assure you is that the foundation is still strong. If there were crisis all over the place, that would have been a different matter,” he said.

Saraki expressed hope that the party would hold its mini-convention as scheduled as delegates had been elected on Saturday.

“You will see that after the mini-convention, all that speculation of body here, spirit there, would go away,” he said.

Previous US Orders All American Citizens To Leave North Korea By September 1
Next Ladoja, Alao-Akala Send Councils To PDP Meeting