A leaked AstraZeneca report has claimed that the trial of one of the world’s most promising coronavirus jabs was briefly halted after a 37-year-old woman suffered a rare neurological condition that left her struggling to walk.

Researchers paused trials of the vaccine – made by Oxford University scientists – last week over safety fears, after it was reported that a volunteer was hospitalised.

Now CNN claims an internal file has claimed the adverse side effect the unidentified British woman had was ‘transverse myelitis’ — inflammation around the spinal cord, typically triggered by viruses but a potential side effect of other vaccines.

AstraZeneca, which owns the rights to the vaccine named AZD1222, never confirmed what the side effect was and has today dismissed the report as being ‘inaccurate’. It also insisted there is no proof that the vaccine was to blame.

The London-based firm’s chief executive reportedly confirmed that the woman did receive the real experimental jab and not a placebo shot. However, the firm has insisted there is no proof that the vaccine was to blame.

She was given the first dose in June, after which she felt fine, and the second was at the end of August. But she started to suffer difficulty walking, pain and weakness in her arms and a headache, after tripping while running in September.

Doctors restarted the trials in the UK on Saturday after five days, while regulators in the US have yet to resume the experiments over the incident amid reports they are ‘highly concerned’.

But one of the US’ top medical chiefs, Dr Anthony Fauci, has today insisted the trial will resume in America imminently and that the side effect was a one-off.

Oxford’s vaccine is one of nine candidates in the world to have reached final stage clinical trials, and has been earmarked as the most promising by the World Health Organization.

More than 50,000 people worldwide had been taking part in ‘phase three’ studies to see whether the Oxford jab can actually prevent people getting infected with Covid-19.

It has been given to 18,000 people across the world so far, AstraZeneca says, and scientists have reassured the public that reactions are not unexpected but always investigated.

Millions of doses have been ordered by nations around the world, should the vaccine prove to be effective and safe to use. The UK has already secured a deal to purchase 100million doses. 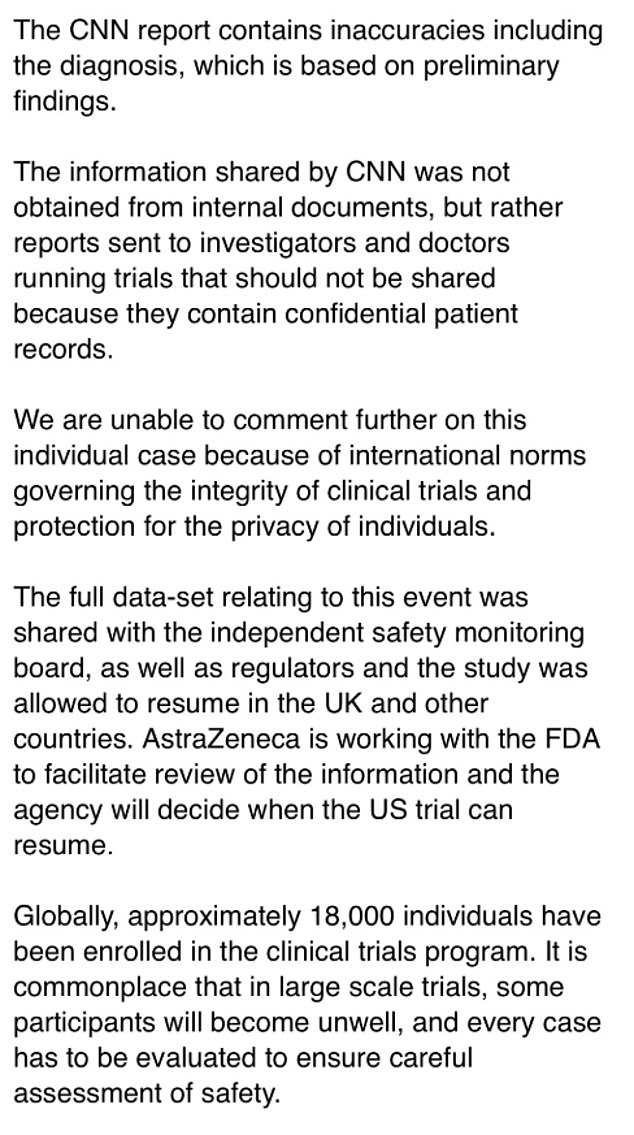 In response to the article in CNN, AstraZeneca said it contained ‘inaccuracies including the diagnosis, which is based on preliminary findings’. MailOnline have contacted AstraZeneca to confirm the statement which was shared on Twitter

The AstraZeneca document, which is labelled an ‘initial report’, was sent to doctors running the clinical trials to warn them of the hospitalised British patient.

Concerned researchers filed what’s called a ‘Suspected or Unexpected Serious Adverse Reaction report’ (SUSAR) on September 10, which is what CNN claims to have seen.

It described how the study participant ‘had trouble walking, weakness and pain in her arms, and other symptoms’.

Fourteen days after receiving her second dose of the vaccine in late August, the woman ‘experienced confirmed transverse myelitis’, the report allegedly says.

On September 2, while running, the study participant ‘had a trip (not fall) with a jolt.’ The report notes that she did not have any obvious injury to her cervical spine.

The next day, the woman had symptoms including difficulty walking, pain and weakness in her arms, pain and reduced sensation in her torso, a headache and reduced ability to use her hands.

She was hospitalised on September 5, several days prior to the SUSAR sent to doctors, and medical news website Stat said she was due to be discharged on September 9 – a discharge date was never officially confirmed.

The AstraZeneca report mentions twice that the woman was diagnosed with ‘confirmed’ transverse myelitis – which is in contrast to the company’s claims last week that the condition was yet to be confirmed.

The cover sheet on the report, allegedly sent by a contractor hired by AstraZeneca, also described her illness as ‘confirmed’ transverse myelitis.

A neurologist who saw the woman said her case ‘suggested the symptoms were consistent with the diagnosis of transverse myelitis’ and that she had no past history of neurological symptoms or significant illnesses.

But at another point, the report claimed to highlight there was ‘limited information concerning the subject’s relevant medical history.’

The neurologist said the woman’s symptoms started to get better quite rapid ‘considering her illness started only four days ago’.

‘Her symptoms were improving. Her strength and dexterity in her hands was getting better,’ the report said.

Physicians diagnose transverse myelitis by performing a thorough neurological examination. They use tests, such as an MRI and lumbar puncture, to rule out any other problems, such as an injury.

In response to the article in CNN, AstraZeneca said it contained ‘inaccuracies including the diagnosis, which is based on preliminary findings’. But it refused to reveal what they were.

It did not share what the final conclusions on the woman’s diagnosis was, and a University of Oxford spokesperson wrote in an email to CNN that ‘we cannot disclose medical information about the illness for reasons of patient confidentiality’.

An AstraZeneca spokesperson continued: ‘The information shared by CNN was not obtained from internal documents, but rather reports sent to investigators and doctors running trials that should not be shared because they contain confidential patient records.

‘We are unable to comment further on this individual case because of internal norms governing the integrity of clinical trials and protection for the privacy of individuals.’

It reiterated it was ‘commonplace’ that in large scale clinical trials like this, some patients will become unwell.

MailOnline has contacted AstraZeneca to confirm the statement which was shared by journalist Meg Tirrell, a senior health and science reporter at CNBC, on Twitter.

A ‘participant information sheet’ on Oxford’s website, updated on September 11, gives further clues into the situation.

That sheet refers to volunteers in the trial who ‘developed unexplained neurological symptoms including changed sensation or limb weakness’ — but not transverse myelitis.

The document says ‘after independent review, these illnesses were either considered unlikely to be associated with the vaccine or there was insufficient evidence to say for certain that the illnesses were or were not related to the vaccine’.

The exact reason for transverse myelitis is not known and sometimes it cannot be traced back to a cause.