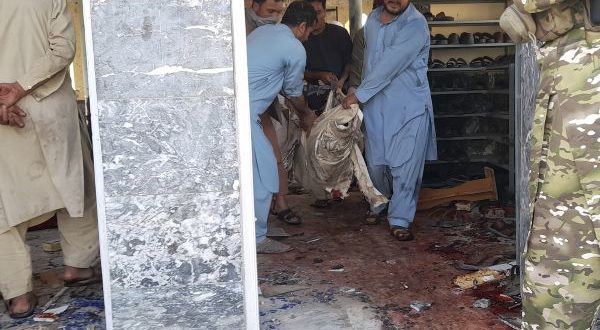 A powerful explosion left at least 100 people dead or wounded inside a Shiite mosque in the northern Afghan city of Kunduz during Friday prayers, according to a senior Taliban official and witnesses.

Taliban police official Dost Mohammad Obaida said the “majority of them have been killed” inside the Gozar-e-Sayed Abad Mosque.

There was no immediate claim of responsibility for the blast, but ISIS militants have a long history of attacking the country’s Shiite Muslim minority.

A death toll in the dozens would be the highest since US and NATO forces left Afghanistan after the Taliban took control of the country.

The Taliban have been targeted in a series of deadly ISIS attacks, including shooting ambushes and an explosion at a mosque in the capital of Kabul.

Images from the scene Friday showed rescuers carrying a body wrapped in a blanket from the mosque, whose stairs at the entrance were covered in blood.

The Taliban have been grappling with a growing threat from the local Islamic State affiliate, known as ISIS-K. The ISIS militants have ramped up attacks to target their rivals, including two deadly bombings in Kabul. The terror group also targeted Afghanistan’s religious minorities in attacks.

The local affiliate has claimed responsibility for the Aug. 26 bombing that killed at least 169 Afghans and 13 American troops outside the Kabul airport in the final days of the chaotic US pullout.

Charles Igbinidu is a Public Relations practitioner in Lagos, Nigeria
@https://twitter.com/ionigeria
Previous  Senator Abaribe Ought To Be Cooling Off In Prison says Femi Adesina
Next 88-year-old heiress to the Schlumberger oil fortune held hostage by daughter, friend claims in suit