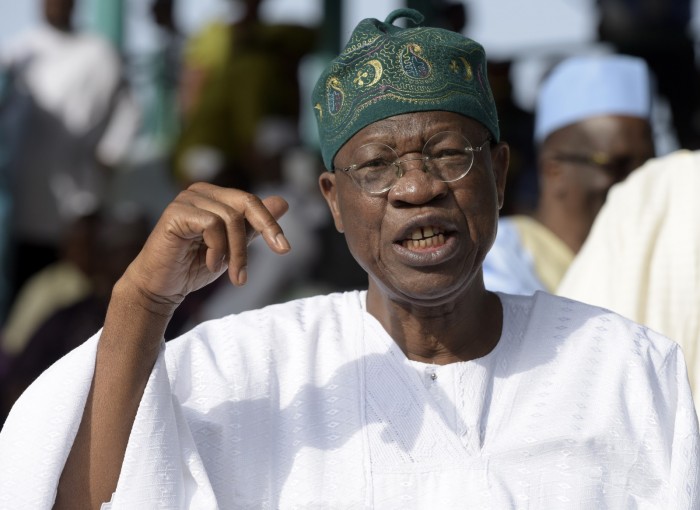 In a copy of the Writ of Summon obtained by the News Agency of Nigeria (NAN) in Abuja, the minister is seeking the sum of N50 billion aggravated and exemplary damages for alleged libel from the defendants.

As contained in the court paper, the minister also asked the court to award another N50 billion general damages against the defendants for alleged libelous publications against him

The defendants to the suit are Mr Johnson Ude, publisher of the online media and Uduma Mba the Editor of the medium. In the summon, the minister said the defendants exclusively published and widely circulated stories in their medium alleging his involvement in a purported N10 billion fraud scandal.

“The defendants made a publication described as ‘Exclusive Pointblanknews.com investigations’ and written under the very bold banner and title: ‘Lai Mohammed in N10 billion Fraud Scandal as ICPC swoops on NBC” which was published on Aug. 3, 2021.

“They published another one tagged as ‘Lai Mohammed, NBC head for showdown over N10 billion Fraud, Minister in Hot Deal with Interpol Most Wanted” publishes on Aug. 11, 2021″

The minister added that since the publication, he had been inundated with calls and personal visits from well wishers, friends, admirers, political followers and his political adversaries.

Mohammed said because of the false and offensive publications, he had suffered mental distress and serious injury to his feelings.
He said, because he was shocked and aggrieved by the publications, he caused his solicitor, Kunle Jalejaye, SAN to write a letter dated Aug. 5, 2021 to the defendants to retract the libelous stories.

The minister also prayed the court to award another N50 billion general damages against the defendants for the false and libelous publication.

He also demanded a retraction of the publications and an apology to be published in three national newspapers (hard copy editions).
Mohammed also asked the court to order the two defendants to respectively write an undertaking to desist from further publication of the defamatory words against him.
NAN reports that the suit is yet to be assigned to a judge and no date has been fixed for mention.

Charles Igbinidu is a Public Relations practitioner in Lagos, Nigeria
@https://twitter.com/ionigeria
Previous Ortom to Atiku: Benue people are not happy with you
Next PHOTOS: Tinubu Returns After Eight Days In London