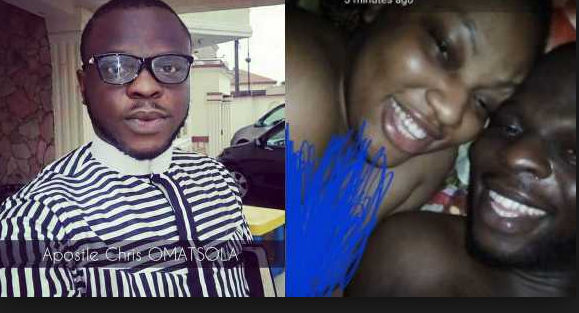 Apostle Chris Omatsola, whose sex tape went viral, has been forced to relocate his church after he began receiving threats following the release of the sex video.

After the sex video went viral, the lady featured in the video, Princess Tamaratokoni Okpe, claimed it was Omatsola himself who leaked the video to get back at her for breaking off their engagement.

But Omatsola has denied being responsible. On the day the video went viral, Omatsola took to Facebook to ask his members to pray for him.

Let he or she that is without a sin among you be the first to cast a stone. Friends, pray for the church of God; pray for Zionwealth Church; pray for #ChrisOmatsola.God bless you. #ApostleChrisOmatsola#IstandwithACO #ZionwealthChurch #SatanWillNotWin #John8v7.

In a recent interview with Punch, Omatsola revealed that he has relocated his church and only core members know the new location.

The Lekki and Ajah locations of the Zionwealth of Life Assembly has been empty and the new location of the church is still being kept a secret.

Omatsola, who is depressed as a result of the incident, said he relocated his ministry because he feared for his life and those of his members. He also added that people had threatened to burn down his church, so they had to move to a secret location.

He also denied claims that he was the one who leaked the video. He added that his only regret was having premarital sex.

Omatsola said he had apologised to his members and that they know the truth about the incident.

A lot of waters have gone under the bridge. We are trying to protect ourselves from the public, because they have not really been fair to us. We still have a lot of our people, although this has affected our ministry grossly. Our church is a ministry. It is an assembly of young people.

We have a location where we meet for now because of what happened; we have been receiving a lot of threats; some people are saying they want to burn our church. We had to change the location to a designated place where we meet and we will not share that with the public, because we don’t want the public; we know our people.

Previous 4-Year-Old Girl Is Gang-Raped By Hospital Worker And Four Others While In Intensive Care In India
Next Murder Case: Police Invites Wife Of Late Credit Switch Boss For Questioning