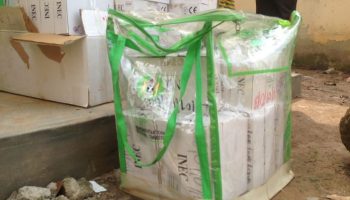 Lagos LG Election: Violence May Erupt In Lagos On Saturday

Transition Monitoring Group, TMG, has warned that the tension building around the coming elections for the Local governments and the LCDAs coming up in Lagos State on Saturday the 22nd of July 2017, may result in violence.
This is contained in a statement on Thursday signed by Abiola Akiyode–Afolabi, Chairperson and Sulaimon Arigbagbu, South West Coordinator, TMG.

TMG said it is particularly worried about the incessant violence in some areas of Lagos, particularly in Mushin due to issues surrounding the nomination of candidates and the tension building up in some quarters due to undemocratic activities of some of the major political parties in the run up to the election and the impact of such tension for the coming elections.

The statement added: “We are also concerned about the speed with which the Lagos State House of Assembly passed an amendment to the Lagos Electoral Law regulating the conduct of election to allow for the substitution of a party candidate before the elections.
“The new bill allows a political party to withdraw and substitute candidate not later than three (3) days to LASIEC verification.

“TMG is worried about the implications and dangers such amendment portends on the credibility of the Saturday, 22nd Lagos State Local Government Area (LGA) Council elections as scheduled by LAISEC.Conduct of credible, free, fair and legitimate elections cannot be achieved in this kind of arrangement with an amendment taken place just three days to election.

“Furthermore, we are also apprehensive of the implications of the multiplicity of court cases relating to party candidatures giving the fact that the election is just three days away.

Such conflicting decisions could cast aspersion on the credibility and legitimacy of the elections.

“We also express displeasure over the latest pronouncement by the authorities of the Lagos State Independent Electoral Commission (LAISEC) regarding its planned accreditation plan and observer’s deployment for the Saturday Local Government Election in Lagos State.

“Our concern is further heightened by the refusal by LASIEC to deploy Card Reader for the conduct of this coming elections. This is an anti-climax to the widely acknowledged improvement to our Electoral System during the 2015 General Elections.

“As a flagship organization on election and governance monitoring in Nigeria, TMG is seriously concerned about plethora of allegations trailing the preparations for the election and the lopsided observer’s deployment plan adopted by LAISEC. TMG urges the commission to reconsider its decision on these issues.

“We call on LASIEC to ensure highest standard in the conduct and administration of the coming Lagos LG/LCDAs elections, by carrying out their responsibilities in accordance with law, and without fear or favour. We hope that LASIEC is committed to an open, genuine, free and appropriate process that is devoid of any suspicion misgiving in the process leading to the election.