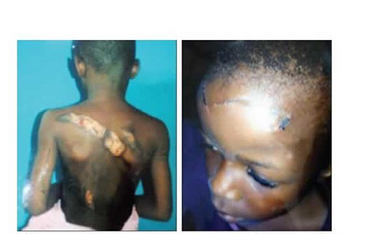 A trader identified as Chidima Nnachi, 29, has been arrested for torturing her stepdaughters, Vera, 10, and Favour, 5, at their residence on Aso Rock Street, Brucknor Estate, Ejigbo, Lagos State.


It was gathered that Nnachi beat up Vera, rubbed pepper on her eyes and burned her back with a hot knife. She also reportedly injured Favour on the forehead and inserted pepper in her eyes for allegedly soiling her body.

While the children were rescued and taken into protective custody by the Office of the Public Defender of the state Ministry of Justice, Nnachi was arrested by the police from the Ejigbo division.

She allegedly tortured Vera because she went to play after returning from the school . It was gathered that the children’s mother died in 2012 after she gave birth to Favour.

A neighbour, identified simply as Olamide, was said to have reported the case at the Ejigbo Police Division and the suspect was apprehended. Olajide told the police that Nnachi had been maltreating the children for a long time.

Nnachi was later arraigned before an Ogba Magistrate’s Court on Tuesday on five counts of assault. She, however, pleaded not guilty and the presiding magistrate, Mr. A.O. Ogbe, granted her bail in the sum of N100,000 with two sureties in like sum and adjourned the case till March 5, 2018.