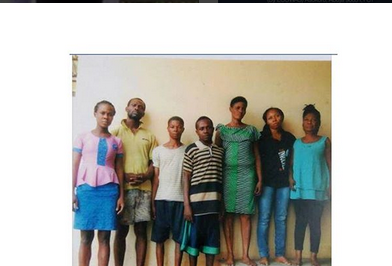 Lady Arrested For Selling Her 1-Month-Old Baby For N400k

Eno Archibong Emah, of ikot Eman Itam, Akwa Ibom State, who gave birth to a baby boy on 12th November, 2017 conspired with one Emmanuel Akpabio Okon and Emem Asuquo Okon and sold the one-month old child to one Kate of Aba, Abia State, at the cost of N 400,000.
Operatives of Akwa Ibom State Command monitored and promptly arrested the mother of the child who later led the Operatives to the arrest of other accomplices in the illicit trade.

They are: Utibe Sunday John, Imo Ime Udoetuk, Friday John Amiang, and Uwana Ime, who all confessed to the crime and their individual roles in the offence, including how the proceeds where shared amongst themselves.