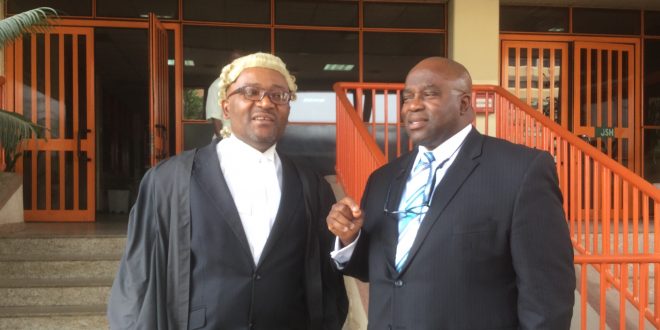 Dan Akpovwa, Publisher of The Abuja Inquirer discussing with his lawyer, Barrister Bassey Offiong, outside the Abuja High Court in Maitama

The Publisher of The Abuja Inquirer newspapers, Dan Akpovwa, has said that the libel suit instituted against the publication by Kingsley Kuku, the former Presidential Adviser on the Amnesty programme, is frivolous, and aimed at intimidating media.

Mr. Akpovwa said on Tuesday at the Abuja High Court when hearing resumed in the case of Kingsley Kuku Vs The Abuja Inquirer (Suit No. CV/263/15). Mr. Jude Okeke of Abuja High Court 12 is the Presiding Judge.

Kuku ran the Amnesty programme under President Goodluck Jonathan. His tenure had come under serious investigation by the Economic and Financial Crimes Commission, EFCC. In mid`2015, he was invited by the EFCC as part of its ongoing investigation, but Mr. Kuku failed to show up. His lawyers wrote to the EFCC that he was in America for medical reasons and will honour their invitation by September 30, 2015, but he has not done that for almost two years now.

Led in evidence by Barrister Bassey Offiong, the Lead Counsel for the Abuja Inquirer Newspapers, Mr. Akpovwa said his newspaper is not guilty in the case.

Also, in his statement under oath, which was admitted in court, Mr. Akpovwa said: “the words complained of by the plaintiff were neither libelous nor slanderous, but well considered and made in the public interest.”

Under cross examination by Kuku’s lawyer, Barrister C. Okorie from the Chambers of Karina Tunya, SAN, Mr. Akpovwa insisted that the publication of the story was driven by pure public interest and not for any financial gains, pointing out that the fact that Kingsley Kuku has not returned to Nigeria to answer the EFCC invitation buttresses the story. Mr. Akpovwa was the first defense witness called by Barrister Offiong, and was cross examined for nearly two hours.

He urged the court to dismiss the suit “with costs for being frivolous, vexatious” and an abuse of court process. He also asked for N5,000,000 [five million Naira} in “general Damages.”

The case was adjourned to March 14 when the Acting Chairman of the EFCC, Mr. Ibrahim Magu is expected to testify for the defense.