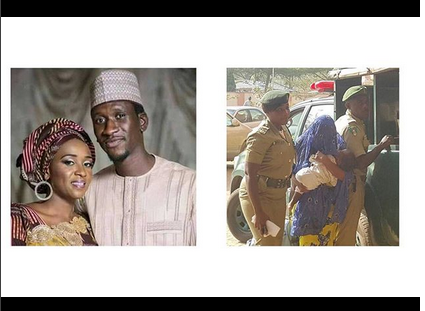 killer Wife To Court: I Am 3 Months Pregnant

Maryam Sanda, who was arrested for allegedly killing her husband, Bilyamin Bello, who was the son of former Chairman of PDP, on Monday, told the trial court that she is three months pregnant.
Maryam begged trial Justice Yusuf Halilu of the Abuja High Court sitting at Jabi to reconsider an earlier application she filed to be released on bail pending the determination of the murder charge against her.

Maryam’s lawyer, Mr. Joseph Daudu, SAN, urged the court to take pity on her client who he said would require proper medical attention at this early stage of her pregnancy.

Besides, Daudu, SAN, said he has raised objections against the competence of the charge which he said ought to have been commenced with a First Information Report, FIR, as envisaged under the Penal Code.

The defence lawyer further contended that the Nigerian Police Force failed to secure the consent of the Director of Public Prosecution, DPP, before it filed the charge.

However, Justice Halilu adjourned the matter till Wednesday to decide whether or not the defendant should be released on bail based on her pregnancy claim.