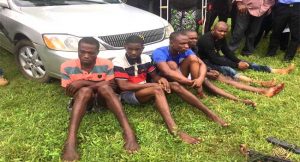 The police in Imo state yesterday paraded five suspected abductors and killers of a priest, Cyriacus Onunkwo, in the state.

One of the suspects is a police officer. The clergyman was abducted on Friday, September 1st in Orlu and his body was later discovered along the road in Omuma on Saturday, September 2nd.

One of the suspects that were paraded said the clergyman was killed in error. According to him,

“When we kidnapped the priest, we used cellotape to seal his mouth, unknown to us, his nose was also sealed. When we discovered that he could no longer talk, we unsealed his mouth and found out that he has dead”.

The police say investigations is still ongoing and that the suspects would soon be charged to court.

Previous EFCC Arrests Its Own Driver, Policeman For Burgling Sealed Mansion Owned By Alex Badeh
Next Aisha Alhassan Never Supported Buhari In 2015, She Did Not Even Vote For Him – El-Rufai