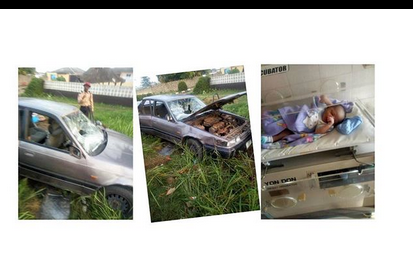 At about 7:30a.m this morning, some Federal Road Safety Corps (FRSC) officials, rescued a pregnant woman from some suspected kidnappers after stopping their vehicle at the AP filling station before Aradagun Bus stop in Badagry, Lagos.

In the vehicle were two suspected kidnappers (male) and a pregnant woman who was their victim. The pregnant woman sustained some injuries and was rushed to Ola-Oki hospital, Ibereko, where she immediately gave birth to a baby boy.

The two kidnappers were about to be burnt by irate mob when some soldiers arrived the scene and arrested them and handed them over to the Nigeria Police in Badagry.