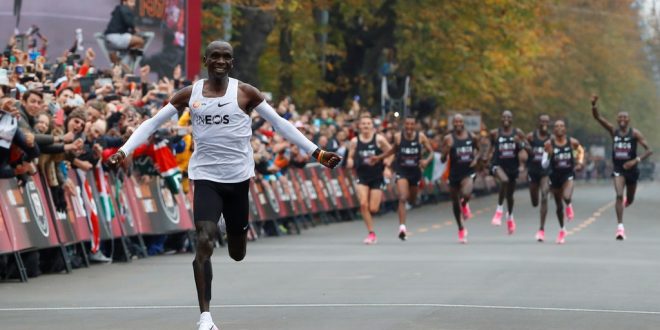 In Vienna, Eliud Kipchoge, the marathon world record holder, on Saturday broke through a temporal barrier that many had deemed untouchable a few years ago.

In Vienna, the Kenyan achieved a milestone once believed to be unattainable. But his time, 1:59:40.2, will not be recognized as a world record.

Kenya’s Eliud Kipchoge has achieved one of the greatest athletic feats of all-time by becoming the first man in history to run a sub two-hour marathon.

The 34-year-old narrowly failed in his previous attempt two years ago, but during a heavily controlled event in Austria Eliud Kipchoge ran 26.2 miles in a once-inconceivable time of 1 hour 59 minutes 40.2 seconds.

In becoming the first person to cover the marathon distance in less than two hours, Kipchoge, 34, achieved a sports milestone granted almost mythical status in the running world, breaking through a temporal barrier that many would have deemed untouchable only a few years ago.

The time will however not be recognised by the sport’s governing body, the IAAF, as an official world record given the race was not an open event and because it featured a dense rotation of professional pacesetters.

What the event lacked in officially sanctioned gravitas, though, it seemed determined to make up for with theater and grandiose proclamations.

The run, organized by the petrochemical company INEOS, featured a cycle of hype and commercial buildup more reminiscent of a heavyweight prizefight than a road race.

After crossing the finish line, Kipchoge jumped into the arms of his wife, Grace, and children. Through all his years of competition, all the victories and medals and records in his career, this was the first time his family had watched him run in person