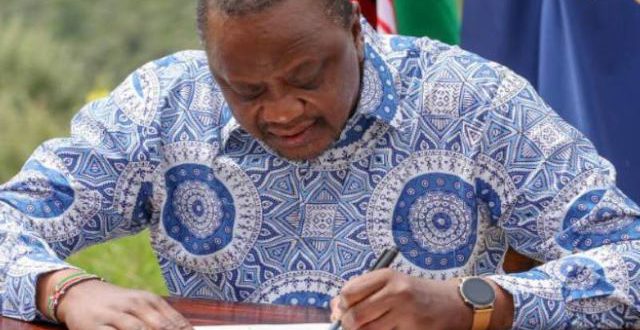 President Uhuru Kenyatta of Kenya has signed into law a bill that would see secret lovers get locked out of their partners’ wealth in case of death.

The President, on Wednesday, November 17, assented to the Law of Succession (Amendment) Bill, 2019 that was sponsored by Homa Bay Town MP Peter Kaluma on November 12, 2019, and passed by the National Assembly.

The Bill sought to amend the definition of the word dependant so as to lockout “illegitimate” spouses from inheriting the property of a deceased person.

In the new law, a dependant is defined as “the spouse and children of the deceased, whether or not maintained by the deceased immediately prior to his death”.

Others, who are considered as dependants, are the deceased’s parents, step-parents, grandparents, grandchildren, step-children, children whom the deceased had taken into his family as his own, brothers, sisters, half-brothers and half-sisters, who were being maintained by the deceased immediately prior to his death.

The law, however, gives room for the nonconventional dependants, including secret lovers, to fight for their rights if they feel aggrieved by the decision to lock them out of the deceased’s wealth.

“A person not named in this section shall not be a dependant for the purposes of this Act unless the person proves [he or she was] maintained by the deceased for a period of two years prior to the deceased’s death.”

While justifying the Bill in November 2019, Kaluma said: “The main aim of the Bill is to avoid situations where opportunistic schemers successfully claim a stake in a deceased person’s estate hence disenfranchising the legitimate heirs of the deceased.”

“The Law of Succession (Amendment) Bill 2019 will streamline the administration of succession matters in the country,” President Kenyatta said on Wednesday after assenting to the Bill.

Kenyans online have welcomed the signing of a new law that prevents secret lovers from inheriting wealth in the event of their partner’s death.

The bill, sponsored by MP Peter Kaluma, only allows children sired by the deceased to get a share of the wealth but locks out partners who are not legally married.

Mr. Kaluma welcomed the signing of the bill into law, saying that girlfriends who had been waiting to benefit from family property now “stand barred”.

Some Kenyans online celebrated the signing of the law with this tweeter saying there would be no more traps:

Akinyi Abong’o tweeted that there would be no joyriders in wealth acquisition: