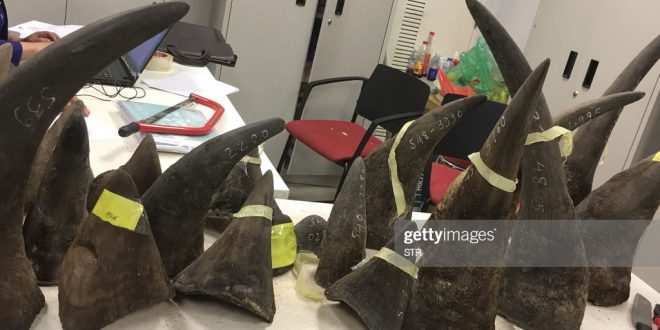 Seized rhino horns are displayed at a customs office in Hanoi in March 2017. (AFP/Getty Images)

NEW YORK (AP) — A man charged with conspiring to smuggle tons of elephant ivory and rhinoceros horns was extradited Monday from Kenya to the United States, where he pleaded not guilty to multiple charges.

Manhattan U.S. Attorney Audrey Strauss announced the arrival of Mansur Mohamed Surur to face a federal court indictment charging him with conspiring in the illegal poaching of over 35 rhinos and more than 100 elephants. The 190 kilograms (420 pounds) of rhinoceros horns and 10 tons (9 metric tons) of elephant ivory were valued at more than $7 million, authorities said.

Strauss said Surur and the criminal enterprise he was part of were responsible for the illegal slaughter of the animals, which are endangered.

Surur, 60, was arrested by authorities in Mombasa, Kenya, last July, after law enforcement agents on July 17, 2018, intercepted a package containing two rhinoceros horns sold to a law enforcement operative who posed as a Manhattan-based buyer.

According to court papers, Surur and co-defendants exported and agreed to export the rhinoceros horns and elephant ivory to foreign buyers, including some in Manhattan.

When they were shipped, the rhinoceros horns and elephant ivory were sometimes hidden in pieces of art such as African masks and statues, authorities said.

The defendants received and deposited payments from foreign customers that were sent in the form of international wire transfers, some of which were sent through U.S. financial institutions, the indictment said.

At an initial appearance before a magistrate judge, Surur pleaded not guilty. He was detained without bail. A message seeking comment was sent to his attorney.

Two co-defendants were brought to the United States last spring to face charges. A fourth individual is a fugitive.