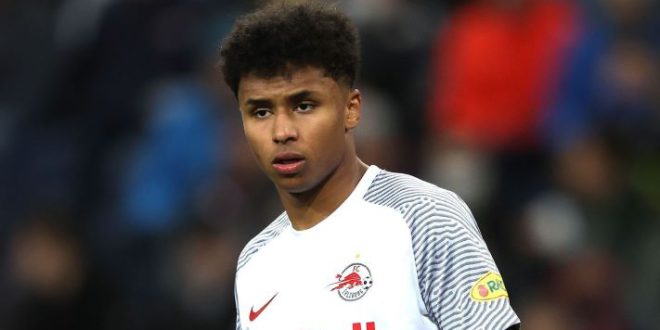 The European minnows almost recorded a famous victory against the German giants after Chukwubuike Adamu scored the opening goal in the first half.

Kingsley Coman spared Bayern’s blushes with a late equaliser and, even though he didn’t score, Adeyemi was praised for his glittering display in Austria.

“It was energetic, but energetic with a little bit of thought behind things. I like the fact that he has looked up twice and he’s trying to get the ball on the money.

“He is always looking to go in behind with the ball or without. He has stop start ability, he favours his left but he has got a right as well.

“Give him half a yard and he will turn you. All round, he looks a fabulous player at 20 years of age.”

Adeyemi has enjoyed a sensational season for Salzburg so far, scoring 14 goals in 18 Austrian Bundesliga appearances.

He’s also found the back of the net four times in the Champions League, including a brace against French champions Lille in the group stage.

It’s believed Borussia Dortmund – who signed Norwegian ace Erling Haaland from Salzburg in January 2020 – are leading the race for the youngster’s signature.

“I have no tendency,” said the striker when asked about his preferred transfer destination in December.

“My mind is here at Salzburg and I’m looking forward to the Champions League with Salzburg. We want to give our all there.”

Adeyemi is being targeted by a host of European clubs ( Image: AFP via Getty Images)

“That young man, a lot of teams are going to be getting the chequebook out,” said Hargreaves.

“Because against a team like Bayern Munich, a team of world class players, he stepped up to the stage and at 20 years old… that is pretty staggering for such a young player.”

When asked about Adeyemi by The Athletic, former Poland international Janusz Gora said: “You know who he reminds me of, in his movements? Lionel Messi.

“The way he glides inside from the right onto his strong left foot with quick little turns.”

Gora, who previously coached the youngster, went on to say: “You could immediately see that he was special, an incredible talent, fast, good technique, explosive on the ball.

“Even though he played against grown men… he was the sort of player who decided games, with a goal or an assist. As a coach, you knew there was something about this kid.”

Charles Igbinidu is a Public Relations practitioner in Lagos, Nigeria
@https://twitter.com/ionigeria
Previous UNBELIEVABLE: Abba Kyari blames IPOB for his ordeal
Next Tiger Woods reveals his career as full-time golfer is OVER after his horrific car crash