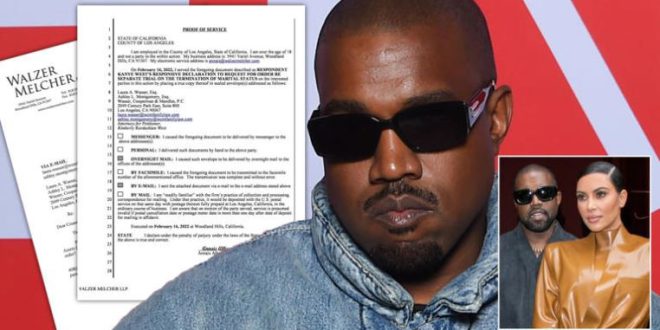 Kanye West has filed a legal document objecting to Kim Kardashian changing her name back to her birth name of Kimberly Noel Kardashian.

The Gold Digger hitmaker, 44, has filed new legal documents in response to his estranged wife’s petition to the judge to declare her single.

Kanye’s lawyer appears to object due to the fact that Kim, 41, might remarry and move some of their joint assets into her separate accounts, reports TMZ.

The Yeezy founder is reportedly happy for the Skims businesswoman to obtain single status, however, only on the condition that safeguards are in place over the assets so that they remain marital property.

Kim filed for divorce from Kanye in February 2021 after six years of marriage.

The couple tied the knot in 2014, and share children North, eight, Saint, five, Chicago, four, and Psalm, two, together.

© Provided by MetroKim and Kanye are having a much publicised divorce (Picture: Marc Piasecki/WireImage)

Kanye’s lawyer has provided three conditions, all of which the lawyer claims Kim has rejected, reports TMZ.

According to legal documents and TMZ, these are that if either of them dies, Kanye wants to make sure any money that might be owed to either of them gets reimbursed, that Kim is blocked from transferring assets out of any trust they created and for Kim to waive their marital privilege pending a final custody decision.

There is also a prenup in place that keeps all of their property separate, so it’s unclear why Kanye has reasons to raise alarm. As part of their divorce, Kim got to keep the couple’s $60million (£44million) Hidden Hills mansion, so that their four children could remain in the family home.

All in all, it’s most likely that Kim will be granted single status next month by the judge on the case.

Last night, North was caught pulling faces at paparazzi as Kim took her out for dinner amid the fraught divorce battle.

The reality star and business woman appeared drawn and serious and was spotted wearing a puffy coat, trousers and dark sunglasses as she was escorted by her team.

However, he has since deleted the posts, and issued an apology, accepting responsibility for ‘harassing’ his ex-wife.

In an interview with US Vogue, Kim said that her outlook had changed in recent years, and that she’d learned to be her own cheerleader.

Speaking to the publication, she said: ‘For so long, I did what made other people happy. And I think in the last two years I decided, I’m going to make myself happy. And that feels really good.’

Charles Igbinidu is a Public Relations practitioner in Lagos, Nigeria
@https://twitter.com/ionigeria
Previous Kell Brook stops Amir Khan in the sixth round to settle their rivalry
Next Mikel Arteta speaks out on Granit Xhaka’s captaincy snub during Arsenal’s win over Brentford