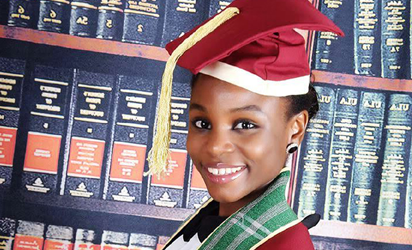 WHEN Miss Faizal Abu bakar Sani, 17, a former student of Olumawu School, Abuja, was writing her West Africa Senior School Certificate Examination, WASS-CE, few months ago, little did she know that the examination would earn her a scholarship to study any course of her choice in any university in the world of her choosing.

As fortune smiles on her, Faizal’s scholarship as stated by the Kano State Government, where she hails from, will know no bounds, as it covers university education in any foreign country to whatever level she wants.

Faizal, who was celebrated by her alma-mater, Olumawu School, Abuja; had nine A1 in the May/June 2016 West African Senior Secondary School Certificate Examination (WASSCE). She had A1  in English Language, Mathematics, Further Mathematics, Chemistry, Physics, Biology, Computer Studies, Civic Education and Marketing. The result was adjudged by her school and Kano State government as the best ever in the state.

Faizal who spoke with Vanguard said: ‘’I will like to study Medicine in any of the famous universities abroad. Meanwhile, I have been offered admission by at least seven universities in the United Kingdom and one university in Egypt, to study medicine.’’

On her reading habit, Faizal who scored 226 in the last JAMB said: ‘’I have no specific study hour because most times I study until I get tired and often fall asleep.”

She, however disclosed that when preparing for examination, she reads and takes a break every 30 minutes.

Her words: “My mother contributed greatly to my academic success, because she encourages and grooms me. My father is a businessman who paid my school fees.’’

On her part, Faizal’s mother, Mrs. Hadiza Abubakar, who is a lawyer, described her daughter as a quiet, reserved and responsible girl who has shown intelligence right from her birth.

She said: ‘’I have not in any way influenced her because she has a mind of her own. Mine is just to guide her and advise her. She is a young girl with an already set mind. I wanted her to go into software engineering, but she said she wanted to read Biomedical Engineering.

‘’I sat her down, looked at it and said that if she goes for that, she will have a limited number of schools to fit in. I advised her to go for Data Based Management course.

“Being a lawyer and working in the Identity Management sector. I saw an area where she could go into, which is Data Base Management course, which has to do with software. She had already made up her mind. If Biomedical engineering is not available, she will go for medicine and she has been on that.”

On early marriage in the north, as opposed to education, she said: ‘’I do not have a problem with early marriage if the girl is already matured. The important thing is that whoever is getting married should be focused.”

Hadiza who said her daughter takes after her said: ‘’Even though I got married at an early age, I knew where I wanted to be and education was my primary focus. I achieved a lot in education. I might not have been an A1 student like her, but I was good in many courses in school.”

The governor of Kano State, Abdullahi Ganduje on his part said: ‘’The scholarship is meant to cover her undergraduate, postgraduate and doctorate degrees at any university of her choice across the world. This gesture is to acknowledge merit and to especially encourage girl-child education in our state.

“The state government is making arrangements to ensure that the gifted children are given opportunity to fully exploit their potentials. We will continue to encourage our people to achieve in their chosen endeavours and bring honour to their families, the state and the nation at large.”

She said: “Once upon a time, girl child was a second class member of her family and society but today, things have changed for better as both sexes have equal opportunities to activate their natural potentials and strive for the best in their life time”.

The Minister of Education, Alhaji Adamu Adamu, charged Faizal to sustain the tempo of her excellent academic feat by taking it to the realm of invention and end up being an inventor who will do Nigeria proud in future.

He said: “We want you to go back to your books on more serious template when you get to the university and repeat this academic feat, entailing reading and researching and through it, becoming an inventor who will do Nigeria proud in future.”

Also, Barrister Arome Audu, a member of the School’s Governing Council who described Faizal’s academic feat as one akin to the one attained by the founder of the school, the late Chief (Mrs.) Margaret Oloruntomiwo Audu as a student at that level in 1951, saying “Faizal is another Mrs. Audu in the making”.

“Faizal by this excellent result has made every minute of her existence and in particular, of her schooling here in Olumawu within the last six years’ count. Therefore, to all other students of the school coming after her, let every minute of your schooling count as well,” he said.

He commended the parents of Faizal for following her up academically on the home front while schooling and preparing for the examination and urged other parents to do likewise to their children just as he saluted the teachers of the school for imparting the right knowledge into her and others, culminating in their excellent performance in both WAEC and NECO examinations.

Meanwhile, in a reaction to this academic feat, WAEC has said through its spokesman, Mr. Demianus Ojijeogu, that WAEC has not officially announced the best WAEC candidate in the May/June 2016 examination.

His words: ‘’The information that Faizal is the best student in the May/June 2016 WASSCE in Nigeria did not emanate from us. There are other candidates in other schools that also have nine As. We do not calculate the best in Nigeria based on the numbers of As. We use aggregate. Scoring A in WASSCE has categories. That Faizal has 9 As does not make her the best candidate in Nigeria. She could be the best candidate in her school, but not even in Abuja or in Nigeria. WAEC will announce at the right time.’’