Malam Ibrahim Shekarau, leader of the All Progressives Congress (APC) in Kano, met with Asiwaju Bola Ahmed Tinubu, National Leader of the ruling party, on Sunday.

The meeting, which held amid the crisis rocking the APC in Kano, took place in Lagos.

Governor Abdullahi Ganduje and Shekarau have been battling for the control of the party in the state.

But last week, an Abuja High Court dissolved excos of the Ganduje APC faction and declared Shekarau’s faction as the authentic one.

After the ruling, the crisis took a new dimension as Nureini Jimoh, a Senior Advocate of Nigeria who represented Shekarau, was locked up in his chamber by officials of the Kano State Government.

Jimoh and his staff were trapped for hours until the building was reopened.

A day after, the gubernatorial campaign office of Senator Barau Jibrin was set ablaze.

Although Ganduje’s camp distanced itself from the disturbing incident, Shekarau faction petitioned the Inspector-General of Police, saying Ganduje’s men must be held responsible.

Ganduje is an ally of Tinubu and he has shown deep interest in the presidential bid of the APC National Leader.

For the first time since his yearly colloquium began over a decade ago, Tinubu held that of this year in Kano, a move some pundits interpreted as a soft landing for his 2023 ambition.

He has also paid many visits to Kano while the state assembly which is loyal to Ganduje has pledged to work for a Tinubu presidency.

But with the Shekarau’s faction holding grounds, Tinubu may probably look elsewhere to seek political relevance in the state with the highest voting population in the country.

Governors Kayode Fayemi (Ekiti) and Mohammed Baduru Abubakar (Jigawa) both addressed Dazango as APC chairman at a lecture to mark the 21st  anniversary of the Mambayya House of Bayero University, Kano.

Ganduje was among the guests who attended the event. 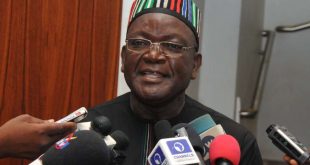