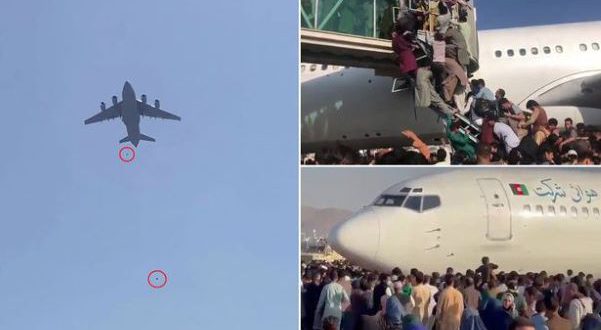 Kabul Airport Horror: Afghans fall to their deaths after clinging to plane in desperate bid to escape Taliban

Distressing video allegedly shows desperate Afghan stowaways plunging to their deaths after clinging to the wheels of a US military plane as it left Kabul.

The horrifying scene unfolded as huge crowds gathered on the tarmac at the airport in a desperate bid to board planes and escape an Afghanistan ruled by the Taliban.

Reports say several men clung to the wheels of a US C-17 amid the Taliban surge across the country to take control following the exodus of US and British troops.

A video appears to show two people falling from the aircraft soon after takeoff.

Three people plunged to their deaths after clinging to the wheels, it is reported ( Image: Aśvaka News)

Footage showed in Afghanistan then shows one body lying on the ground purporting to be one of those who fell to their deaths.

A Kabul news agency reported: “Locals near Kabul airport claim that three young men who were holding themselves tightly in the wheels of an aeroplane fell on top of people’s houses.

“One of the locals confirmed this and said that the fall of these people made a loud and terrifying noise.”

A later report said “the video shows a flight from Kabul airport where two people are thrown from a plane into the people’s homes.”

Desperate Afghans climb a jet bridge in a bid to board a plane ( Image: Twitter)

It came amid harrowing scenes at the airport in Kabul, where hundreds of Afghans had gathered on the tarmac in a desperate bid to board flights out of the country and escape Taliban rule.

At least five people were killed during the chaos on Monday, witnesses told Reuters, though officials have not confirmed how they were killed.

The Wall Street Journal reported that at least three people were shot dead.

Three bodies could be seen on the ground near what appeared to be an airport side entrance, in a video posted on social media.

Afghans trying to flee the country have gathered at the airport in Kabul ( Image: Twitter)

An American official said earlier that troops had fired in the air to deter people trying to force their way onto a military flight that was set to take US diplomats and embassy staff out of the fallen city.

US soldiers had seized control of the airport and air traffic control as American and allied staff were evacuated from the capital, which had been seized by the Taliban.

President Ashraf Ghani fled from the country on Sunday as the Islamists entered Kabul virtually unopposed, saying he wanted to avoid bloodshed.

British troops are racing against the clock to get remaining UK nationals and their local allies out of Afghanistan following the dramatic fall of the country’s Western-backed government.

Taliban forces, including one militant armed with a rocket launcher, stand guard inside Kabul ( Image: REUTERS)

Charles Igbinidu is a Public Relations practitioner in Lagos, Nigeria
@https://twitter.com/ionigeria
Previous UK PM Johnson blames US President Biden for accelerating the collapse of Afganistan as Taliban storm presidential palace
Next Trump demands Biden ‘resign in disgrace’ in statement as he slams president over Taliban in Afghanistan, Covid & border