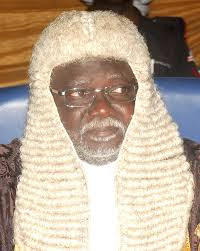 A Justice of the Supreme Court, Inyang Okoro, has accused the Minister of Transport, Mr. Rotimi Amaechi, of orchestrating his ordeal.

In a letter dated October 17, 2016 and addressed to the Chief Justice of Nigeria, Justice Mahmud Mohammed, Okoro said, “I strongly believe that my travail is not unconnected with the verbal report I made to you on 1st February, 2016 about the visit to my official residence by H/E Rotimi Amaechi, former Governor of Rivers State and now Minister of Transportation.

“In that report, I told you my Lord, that Mr. Amaechi said the President of Nigeria and the All Progressives Congress mandated him to inform me that they must win their election appeals in Rivers State, Akwa Ibom and Abia State at all costs.”

Justice Okoro said although he declined the request and ensured he was not on the Akwa Ibom tribunal, Amaechi and others in the APC believed his presence in the Supreme Court made the APC lose its challenge against the Akwa Ibom governorship election at the apex court.

Inyang also faulted the DSS for asking him questions about non-existent houses across the country as well as doubting the age of his children.

Inyang added that he was entitled to have more than the amount recovered from him by the DSS, saying the recovered money was the balance of his estacode received from the Supreme Court for the past three years.

This, according to him was different from the estcodes he received for international Conferences he has so far attended since joining the apex court.

“The DSS has not confronted me with any petition or complaint from any quarters whatsoever. Rather they have grilled me, asking questions on some none existing properties around the country. They have also doubted the age of my children alleging that they are toddlers. This is sad and unbelievable”, Inyang said.

He urged the NJC to ignore all allegations against him as they were lies, insisting he legitimately earned the money found in his house.