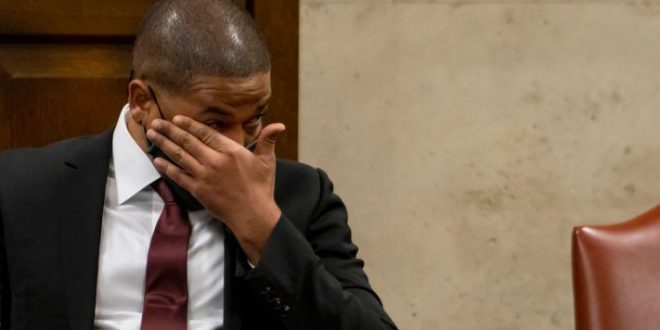 Smollett claimed two attackers threw a noose around his neck and poured chemicals on him while yelling racist and homophobic slurs in January 2019. Pic: AP

Jussie Smollett has been sentenced to 150 days in jail for lying to police about a racist and homophobic attack that he had staged on himself.

The actor – who was best known for starring in Empire – loudly shouted after the sentencing: “I am innocent. I could have said I am guilty a long time ago.”

Prosecutors had alleged that the 39-year-old, who is black and gay, had lied to officers when he told them that he was accosted by two masked strangers on a dark Chicago street in January 2019.

Smollett had claimed the attackers threw a noose around his neck and poured chemicals on him while yelling racist and homophobic slurs – and that they expressed their support for then president Donald Trump.

But the star was arrested a month later and claimed Smollett paid two brothers $3,500 (£2,600) to stage the attack in an effort to raise his profile.

He pleaded not guilty to six counts of felony disorderly conduct – but a jury found him guilty of five of those counts back in December.

During a sentencing hearing on Thursday, Smollett’s grandmother Molly had described him as a “justice warrior” – and the 92-year-old told the court: “I ask you, judge, not to send him to prison. If you do, send me along with him, okay?”

His brother Joel also spoke in his defence, and said Smollett was “not a threat to the people of Illinois”.

Lawyers representing the actor also read out letters of support from a Black Lives Matter organiser, as well as Samuel L Jackson, which asked the judge to consider the impact that jail time would have on his life and career.

Others expressed fears that Smollett would be in danger in prison because of his race, sexual orientation and his family’s Jewish heritage.

Local officials said the costs of investigating the actor’s allegations were significant – but the impact that his false report had on “actual victims” of such crimes was immeasurable.

Prior to the sentencing, experts had predicted that Smollett would not be sent to prison because he did not have an extensive criminal history, and the conviction was for a low-level, non-violent crime.

Smollett had faced a maximum of three years in prison for each of the five counts he was convicted of.

Charles Igbinidu is a Public Relations practitioner in Lagos, Nigeria
@https://twitter.com/ionigeria
Previous Ex-Minister: I Deserve To Be Jailed Over How I Served Nigeria
Next Chelsea sale back on after Roman Abramovich and government find agreement