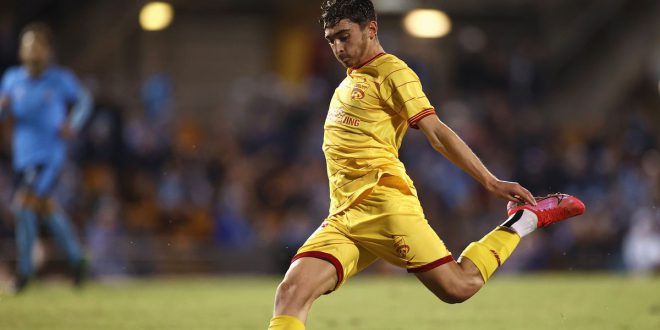 Adelaide United star Josh Cavallo fought back tears as he came out as one of the world’s few openly gay professional footballers in a brave video.

Cavallo, 21, admitted he has been “living a double life” and “hiding who he is” in a clip posted on the A-League club’s official Twitter account.

The Australia Under-20 international said he grew up “ashamed” he would not be able to play football and be gay.

“But that’s not the case, if anything you earn more respect from people.”

Cavallo, who plays as a central midfielder or left-back, debated whether to publicly come out as gay for six years, but the “immense” reaction to his announcement has made him question why he waited so long.

He added: “The response and support I have received is immense, it’s starting to make me think, why have I been holding this burden for so long?”

The video on Adelaide’s social media was accompanied by a statement on Cavallo’s own profile which he hopes could inspire other gay footballers “living in silence” to come out and be their “authentic selves”.

There are only a handful of gay professional footballers active today including San Diego Loyal midfielder Collin Martin, who plays in the second tier of football in the USA.

“In football, you only have a small window to achieve greatness, and coming out publicly may have a negative impact on a career,” wrote Cavallo.

“As a gay footballer, I know there are other players living in silence. I want to help change this, to show that everyone is welcome in the game of football and deserves the right to be their authentic self.

Charles Igbinidu is a Public Relations practitioner in Lagos, Nigeria
@https://twitter.com/ionigeria
Previous Brazil senators back criminal charges against President Bolsonaro over poor handling of Covid
Next Jesus College at Cambridge will today return Benin bronze cockerel to Nigeria 124 years after it was looted by British colonial forces