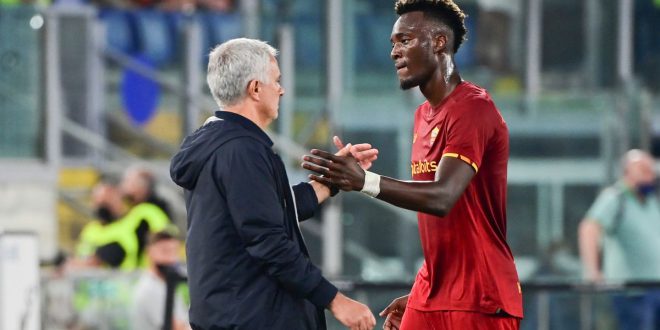 Manchester United have been told Tammy Abraham must “be in the conversation” this summer – and Jose Mourinho is happy to approve a deal.

Erik ten Hag’s Old Trafford tenure got off to the worst possible start last weekend, as his new charges fell to a 2-1 home defeat at the hands of Brighton. After a positive pre-season, United looked miles off the pace and were soundly beaten by Graham Potter’s well-drilled outfit.

Much of the build-up to the league opener was dominated by Cristiano Ronaldo and whether he would be included in the starting XI. The 37-year-old has endured a tumultuous summer, missing the majority of their summer programme after telling bosses he would like to leave.

That exit has yet to materialise, with his dream of playing in the Champions League now hanging by a thread. Ten Hag insists that Ronaldo remains part of the plan, but was left out of the starting line-up, having played just 45 minutes under the Dutchman.

But with Anthony Martial injured, Ten Hag was left with a scenario which instead saw him start Christian Eriksen in a false 9 position. That didn’t work out and the new manager admitted his side improved once Ronaldo became the focal point of his attack.

He is now likely to start against Brentford next time out, but there are still question marks over the position – particularly with Ronaldo’s uncertain future. And former Crystal Palace chairman-turned pundit, believes United should turn to Roma striker Abraham, after a brilliant first campaign for the Giallorossi.

“Both Chelsea and Manchester United need centre forwards, Abraham has scored 17 or 18 goals for Roma last year, I am not sure why he is not in the conversation for Manchester United or Chelsea,” Jordan said on talkSPORT.

“Even sides that clearly have a need for a certain type of player, because I don’t think Raheem Sterling is going to be the answer for Chelsea from a focal point.”

Abraham has already become a hero at the Stadio Olimpico, scoring 27 goals in all competitions, with his 17 in Serie A breaking Gabriel Batistuta’s record for a maiden season in the Italian top-flight.

His goals also guided Roma to the inaugural Europa Conference League, where they beat Feyenoord in the final. The former Chelsea striker has a new lease of life with the Italian giants and under the tutelage of Mourinho has returned back to the England fold.

And the Special One has admitted that he wouldn’t stand in the way of the 24-year-old should he want to return to the Premier League. “He knows how happy I am. He knows how much I love the kid and the player and I’m proud of what we are doing and I’m so happy for Tammy,” he said at the end of last season.

“We have got into this situation where I demand a lot from him because I know he can do amazingly well.”

He continued: “I don’t think it’s an easy decision for a young player to leave his club, his house, his city, his country and to leave the Premier League which is of course a competition that when a player is in its hard to leave.

Abraham himself has hinted that it could be an option, although insisting his full focus remais on success with his current club. “Of course I grew up in England, I’m a London boy. So maybe one day I’ll be back in the Premier League to make noise there,” he admitted to talkSPORT back in April.

“But for me right now it’s about focusing on Rome, on doing the best I can and hopefully winning these guys a trophy which they haven’t done in many years.”

Charles Igbinidu is a Public Relations practitioner in Lagos, Nigeria
@https://twitter.com/ionigeria
Previous Salman Rushdie is STABBED in the neck on stage in New York – after years of death threats over Satanic Verses
Next Cristiano Ronaldo and Lionel Messi snubbed on shortlist for UEFA award for first ever time