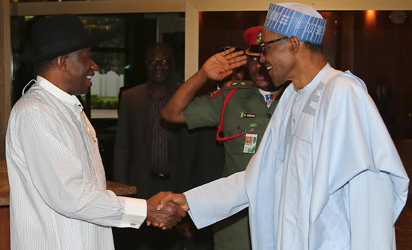 ABUJA-Former President Goodluck Jonathan has advocated for a united Nigeria, saying that the country would be better off as such. He said that Nigeria’s prominent position in the global map was attributable to its size, diversity and human resources.

The former president spoke to State House Correspondents after holding a closed door meeting with President Muhammadu Buhari at the presidential Villa, Abuja on Wednesday. His response followed questions on his role towards ensuring peace and stability in the Niger-Delta region.

He arrived the Villa at exactly 1:55pm and exited at about 2:18 pm. He said: “It’s not just about me but about all the traditional rulers, elders and opinion leaders that are of the Ijaw ethnic nationality. We have been in touch to see that peace reigns in the country.

Those of you that have followed my talks when I was here, my emphasis is that we need a United Nigeria and I always emphasize that Nigeria is great not just about the oil.

“So many countries produce more oil than Nigeria nobody notices them. We are great because of our size, the human resources we have, the diversity we have, if we fragmentize the country into small components, we will be forgotten by the World.

“That has been my focal position and without peace there cannot be development anywhere in the world. We are all working collectively to see that issues are resolved.”

Speaking on his mission to the Villa, he said he was there to brief President Buhari on his emergence as the leader of African Union, AU elections monitoring team to Zambia.

“You asked why I came to see the President today, one key thing is that having been a head of a government, a former president you become a state property. That’s the privilege you have but every privilege has its corresponding responsibility, and once you become a state property, most of your international engagement, that has to do with public addresses and some international assignment becomes a national assignment, you brief the President.

The former president however refused to comment on corruption saga in the country, saying he would speak at the appropriate time.

“I don’t want to talk about that one because there are too many cases that are in court. It will not be fair to make comments. I will talk at the appropriate time when most of these things are resolved”, he said.

Charles Igbinidu is a Public Relations practitioner in Lagos, Nigeria
@https://twitter.com/ionigeria
Previous Obama describes Trump as “unfit to serve as president”
Next Don’t link us with Arepo criminals – ND Avengers