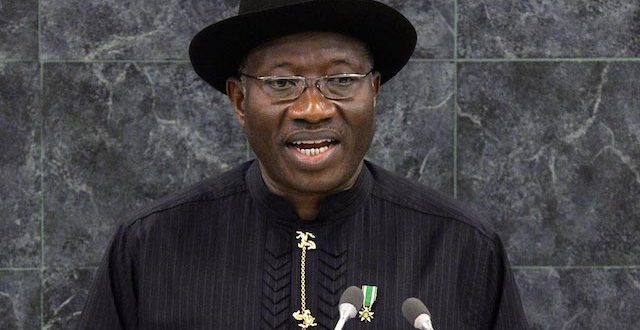 Jonathan: How Policemen Attached To Me Died At Abuja Airport

Former President Goodluck Jonathan has spoken on the accident involving his convoy in Abuja on Wednesday evening.

Details of the tragic incident are still sketchy but ionigeria.com gathered that it occurred while Jonathan was heading home from the Nnamdi Azikiwe International Airport, Abuja.

Commenting on the incident in a statement, which Mr. Ikechukwu Eze, his spokesman, issued on his behalf, the former president said two police officers died instantly in the accident which happened within the airport.

He said the accident involved a car conveying the security men working with him, adding that two other officers sustained injuries.

Jonathan, who described the incident as painful, said the deceased officers were dedicated to duty.

“Former President Dr. Goodluck Ebele Jonathan has expressed deep sadness over the unfortunate tragic death of two police officers attached to him, in a road crash today at the vicinity of the Abuja airport, while on his way out of the airport.”

“The former President who described the incident as painful and heart-rending stated that the sudden death of the two security details has thrown him into deep mourning.

“Dr. Jonathan noted with sadness that the deceased, Inspectors Ibrahim Abazi and Yakubu Toma, were fine officers who were dedicated to their duties and service to the nation.

“Two other officers sustained injuries in the accident which involved a car conveying the security men. They were rushed to a hospital in Abuja where they are responding to treatment.

“The office of the former President has offered condolences to the families of the bereaved and the Police High Command.

“Dr. Jonathan prayed God to grant the souls of the departed eternal rest and bless their families and the nation with the fortitude to bear the loss,” the statement read.