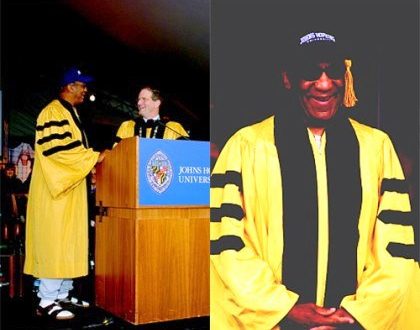 Johns Hopkins University announced Thursday afternoon that its board of trustees has revoked an honorary degree previously presented to Bill Cosby.

This came hours after the iconic entertainer was convicted on three counts of felony-aggravated indecent assault in connection with a 2004 incident at his home near Philadelphia.

Cosby, 80, was one of four people to receive an honorary from the university in 2004, and he spoke that year at the diploma ceremony for seniors from the Krieger School of Arts and Sciences and the Whiting School of Engineering.

This is the first known instance of Johns Hopkins rescinding an honorary degree, which the university has presented to more than 480 individuals since 1880.

“The university conferred the honorary degree on the comedian and actor in 2004 based on his professional accomplishments to that date,” the university said in a statement.

At the time the honorary degree was conferred, the university was unaware of the allegations that Mr. Cosby sexually assaulted dozens of women over decades.

“Johns Hopkins honors the principle of due process. The jury’s decision today is the result of a fair and independent process. Accordingly, the Board of Trustees has decided to revoke Mr. Cosby’s degree.

“As a university, we stand in firm opposition to sexual assault, whether on our campuses or elsewhere. This decision underscores that opposition,” the university stated on its website.

Meanwhile, according to a latest Associated Press report, one of Cosby’s accusers says he’s “a raping monster” and she looks forward to seeing him “in handcuffs on his way to prison” following his conviction on charges he sexually assaulted a woman at his suburban Philadelphia home.

Louisa Moritz says Cosby “has groomed, then raped, then threatened so many” women. She says he raped her in a dressing room of “The Tonight Show” in the 1970s.

Another Cosby accuser is an actor and former bodybuilder Lou Ferrigno’s wife, Carla. She says she’s “so happy” to learn about Cosby’s convictions.

Cosby was accused of drugging and molesting a woman at his mansion in 2004. He has denied the allegations but was convicted on Thursday and could get several years in prison.