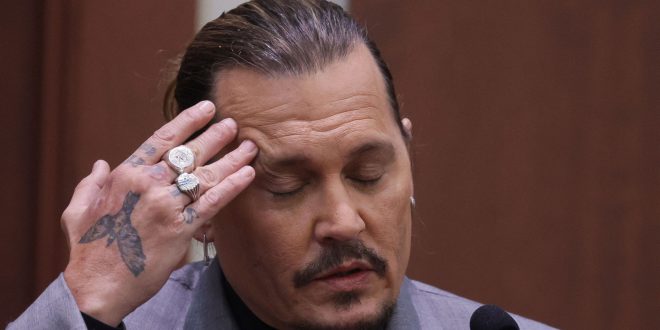 Pirates of the Caribbean star Johnny Depp, 58, was awarded compensatory damages of $10million (£8 million) and a further $5 million (£4 million) in punitive damages by a jury this afternoon

Johnny Depp was spotted in a pub just moments before winning his multi-million dollar defamation lawsuit against ex-wife Amber Heard.

The Pirates of the Caribbean star, 58, was awarded compensatory damages of $10million (£8 million) and a further $5 million (£4 million) in punitive damages by a jury this afternoon.

Depp did not appear in court today as he was in the UK and was seen just minutes before the verdict was read out in Newcastle’s Bridge Tavern.

He had traditional fish and chips before he left to listen to the verdict in the court case verdict around 7 pm.
Later, he was spotted celebrating his victory over Heard in the Jam Jar venue in the Jesmond area of the city.
Janine Latchford, 33, the manageress of the Bridge Tavern, said that she could not believe it when Depp walked into the bar around 5 pm.
“I got to speak to him briefly – he was getting mobbed,” she said.

“But he was the nicest guy I have met in my life and he was very polite and friendly with everyone. He is without doubt the most famous person we have ever had in here.

“He is probably the most famous man in the world at the moment because of the court case.

“He left just before the verdict and was heading off for a Zoom call to America. So I wished him good luck before he left and I think that he was going back to his hotel for that.

“He came in with Jeff Beck but he was quite subtle about it – so he was able to get some food on the terrace and we could give him some privacy before the crowds arrived.

“He was here for about two hours, he had fish and chips which he said that he loved.

“I was a massive fan of his during his Pirates of the Caribbean Days, I had big posters of him on the wall so it was surreal to see and meet him.

“I could not be happier when I heard that he had won, I followed the case.

“By the time he left, there were a few hundred people outside waiting to see him, I had to get extra security in on the door. The phone has not stopped ringing, people asking if he is still here – word gets around.”

Johnny Depp did not appear in court this afternoon ( Image: POOL/AFP via Getty Images)

The actor sued Heard over a newspaper article titled: “I spoke up against sexual violence — and faced our culture’s wrath. That has to change.”

The article did not mention Depp by name, but his lawyers said it falsely implied he physically and sexually abused Heard while they were together.

Heard appeared downcast as the ruling was read out. She was awarded $2million after proving one of her counterclaims.

Following the verdict Heard said she felt “heartbroken” by the ruling, adding she was “sadder still” that she had “lost a right” to “speak freely and openly”.

“The disappointment I feel today is beyond words. I’m heartbroken that the mountain of evidence still was not enough to stand up to the disproportionate power, influence, and sway of my ex-husband,” she said in a statement.

“I’m even more disappointed with what this verdict means for other women.

“It is a setback. It sets back the clock to a time when a woman who spoke up and spoke out could be publicly shamed and humiliated.

Amber Heard appeared downcast as the verdict was read out

“It sets back the idea that violence against women is to be taken seriously.

“I believe Johnny’s attorneys succeeded in getting the jury to overlook the key issue of freedom of speech and ignore evidence that was so conclusive that we won in the UK.

“I’m sad I lost this case. But I am sadder still that I seem to have lost a right I thought I had as an American – to speak freely and openly.”

In his statement, issued through his spokesperson, Depp said: “Six years ago, my life, the life of my children, the lives of those closest to me, and also, the lives of the people who for many, many years have supported and believed in me were forever changed.

“All in the blink of an eye.

Heard said that she was ‘heartbroken’ after the verdict ( Image: AFP via Getty Images)

“False, very serious and criminal allegations were levied at me via the media, which triggered an endless barrage of hateful content, although no charges were ever brought against me. It had already travelled around the world twice within a nanosecond and it had a seismic impact on my life and my career.

“And six years later, the jury gave me my life back. I am truly humbled.”

Depp went on to say his decision to pursue the case “was only made after considerable thought” and his goal was to “reveal the truth, regardless of the outcome”.

“Speaking the truth was something that I owed to my children and to all those who have remained steadfast in their support of me. I feel at peace knowing I have finally accomplished that,” the actor said.

He said he had been “overwhelmed by the outpouring of love and the colossal support and kindness from around the world”, adding: “I hope that my quest to have the truth be told will have helped others, men or women, who have found themselves in my situation, and that those supporting them never give up.”

Mr. Depp said: “The best is yet to come and a new chapter has finally begun” before concluding: “Veritas numquam perit. Truth never perishes. “