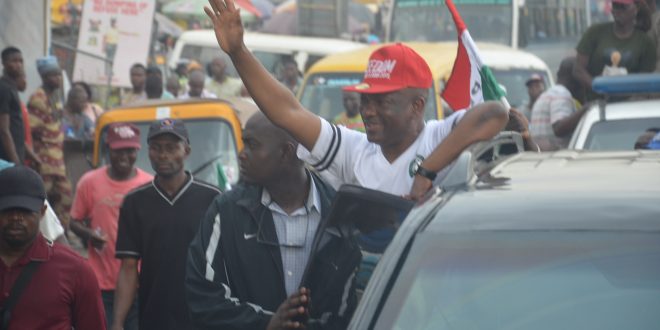 With the largely bungled presidential and national assembly elections, it appears that Nigerians would still file out on March 9, in about 29 of the 36 states, to elect and re-elect governors and state houses of assembly members across the nation.

It will be interesting to see what happens in states like Imo, Kano, Kaduna, Cross River, Rovers, Akwa Ibom, and Lagos. Nigerians expect lots of political fireworks in these states, especially Rivers and Lagos, given the political tensions already being experienced in these states. In Lagos, Mr. Jimi Kolawole Agbaje’s People’s Democratic Party (PDP) has resolved to rout the All Progressives Congress (APC) in the bid to, essentially, end Mr. Bola Ahmed Tinubu’s (BAT’s) domination of Lagos politics.

He walks confidently, talks coherently, and displays the conviction of a champion. When he talks about the upcoming Lagos governorship contest, Mr. Jimi Agbaje certainly sounds like a man on a mission. And that mission, he says, is to bring back democracy thereby freeing Lagos from the political quicksand in which it has been stuck since 1999. The man fondly called J.K. believes that the only way to liberate and renovate Lagos is to throw out the APC government and enthrone good governance when he becomes Governor of Lagos come May 2019.

Lagos is a cosmopolitan city that is continually changing. With all ethnic groups represented, Lagos is, indeed, a microcosm of Nigeria. It is regarded as a mega city, going by the 2016 estimated population of over 20million people. This status and the ever-changing demography as well as political despotism, have all conspired to complicate the politics of Lagos. And many discerning sincere minds agree that it is the greed and parochial politics of one man that has sapped the vitality of progress in our beloved Lagos.

By comparing this sprawling city to the many lifeless states in Nigeria, many people erroneously think that Lagos is doing very well socioeconomically. With the alleged internal generation of a whopping N35- N50Billion monthly revenue without commensurate value to show for it, one wonders what has been happening to Lagos. Lagosians should demand to know what Lagos has gotten for the N7trillion the government claims to have spent in the last 20 years. With such eye-popping amounts, Lagos promises to do way better than it is currently doing, when a better manager comes on board in May.

Most Lagosians do not know that Lagos has an economy that is bigger than some nine African countries combined. They also do not appreciate the fact that the annual budget of Lagos state is in the trillions. In light of the above statistics, it is inexcusable that Lagos has not been able to spruce up her grossly inefficient refuse disposal and transportation systems. We still have the traffic gridlocks and the filth. What a shame! A state that holds itself out as a model in the nation should not be in this kind of socioeconomic quagmire. And so, with such awful performance record, it will be immoral to re-elect the clique that has misruled Lagos since 1999.

In this regard, therefore, Lagos is due for a political revolution. It is only in Nigeria that such inexcusable inefficiency would fail to instigate a statewide outrage. Listening to J.K, one feels his passion for the job and compassion for the people he intends to liberate. Frankly, many have governed Lagos since the return of democratic governance, but hardly any, with the exception of the venerable Alhaji Lateef Jakande, was able to demonstrate the degree of desire that Jimi Agbaje exhibits. Sadly, the obvious mismanagement of Lagos and the domineering influence of one man have lingered for two decades and that is how long Lagos has suffered from their attendant consequences.

A leopard cannot change its spots. It is déjà vu all over again. They have presented Lagosians with a choice between a Jimi and a Jide, and Lagosians appear poised to choose a Jimi any day. Lagosians expect the amazing Agbaje to rescue them from the duplicitous politics of a discredited clique. Lagos must be freed from the false politics that has curtailed its growth for decades. Jimi Agbaje’s “Freedom for Lagos” campaign is real and I hope that Lagosians would see through the ingenious political rigmaroles of the lion of Bourdillon. Anything short of this would be irresponsible, period!