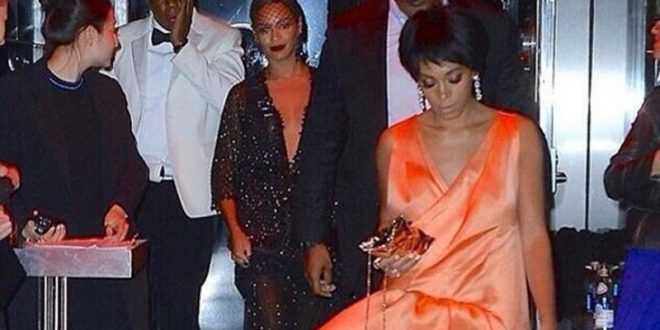 Jay-Z Finally Opens Up About His Infamous Elevator Fight With Solange .

Jay-Z has finally spoken up the elevator row that happened between him and in-law Solange a few years back. The 47-year-old rapper was famously caught on camera rowing with his sister-in-law in an elevator after the Met Gala in 2014.
He said: ‘We’ve always had a great relationship. I fought my brothers and argued with my brothers my whole life. It just so happens, who we are, these things go into a different space, but it ain’t nothing.

‘We’ve had one disagreement ever,’ he claimed in the new interview. Speaking on the Rap Radar podcast, he added: ‘Before and after, we’ve been cool. She’s like my sister. I will protect her. That’s my sister. Not my sister-in-law. My sister.

I think we went into that elevator great artists. That don’t surprise me. ‘I’ve always loved Solange’s music. I think she was slept on before this album. I thought the album before this one was amazing too. Incredible artist.’

Previous How My Daughter Was Killed For Ritual, By Someone I Saw As My Cousin -Father
Next President Buhari Will Resume Work Immediately – Femi Adesina