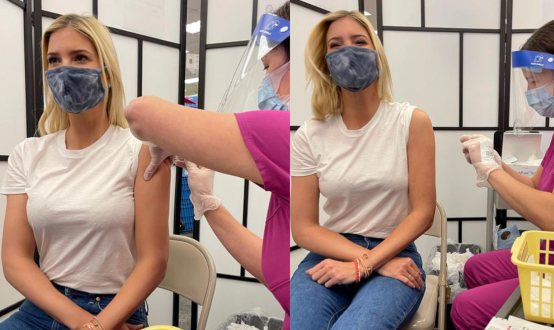 Ivanka Trump took to social media for the first time since President Biden’s inauguration to announce she was vaccinated against the coronavirus. But some fans aren’t too pleased.

“Today, I got the shot!!! I hope that you do too! Thank you Nurse Torres!!!” she captioned her Instagram photo, where Trump can be seen receiving her shot in her new home state of Florida, where she moved after leaving Washington, D.C.

Trump confirmed to the Associated Press (AP) in a statement that she received the Pfizer vaccine.

While she encouraged her followers to get vaccinated as well, some voiced their discontent with her decision and a distrust of the vaccine.

“Nope not putting that in my body,” one follower wrote.

“No thanks! With a 99% survival rate, I shall pass,” another said. “With Bill Gates involved I will not get one.”

“Because of the 99.8% survival rate of a virus they’ve never identified? Anthony Fauci and Andrew Cuomo would be proud,” one follower added.

“Ugh. A vaccine for a HOAX?” replied another.

“Bummer. I was hoping you were above this kind of virtue signalling,” one Instagram user wrote.

Another chimed in: “Hell no. Quit telling perfectly healthy people to take this so-called vaccine.”

Some simply said it was “disappointing” while others said they did not want to be a “lab rat”.

“Love you! But going to decline,” one wrote on Facebook.

Journalist Stephanie Ruhle wrote: “@IvankaTrump posted herself getting vaccinated on Instagram & encouraged others to do so. The comments are astonishing,”

. @IvankaTrump posted herself getting vaccinated on instagram & encouraged others to do so.
The comments are astonishing:
– HARD NO
– PASS
– HELL NO
– WHY?
– THAT IS DISAPPOINTING
– DON’T NEED, I HAVE AN IMMUNE SYSTEM
– DISAPPOINTED IN YOU
– HOPE IT WAS A PLACEBO
– LMAO

Charles Igbinidu is a Public Relations practitioner in Lagos, Nigeria
@https://twitter.com/ionigeria
Previous Mother killed son then hid his decomposing corpse in a bedroom for 2 months
Next Politician accidentally records himself naked and changing clothes on parliamentary Zoom