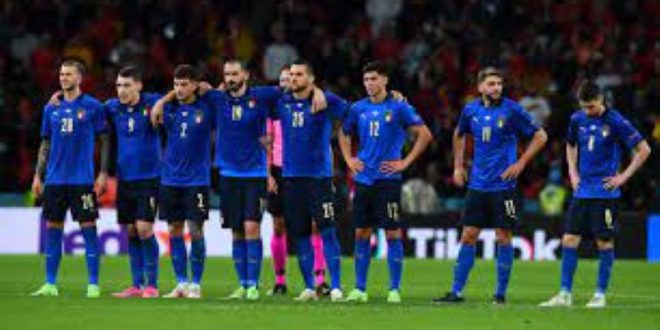 Italy have reportedly suffered a coronavirus scare with three media staff testing positive at the team’s HQ just two days before their Euro 2020 final against England.

According to The Sun officials immediately strengthened the bubble around the team and carried out a series of tests to make sure none of the players or immediate staff were also affected.

Their training camp at Coverciano, on the outskirts of Florence, was immediately shut and a specialist cleaning team was brought in to sanitize the facility.

A source at the Italian FA said: “It’s not the ideal preparation for the team and we are making sure that none of them are infected but we are taking no chances and tests are being carried out.

“The chance of infection with any of the team is small but we want to be sure.

“It means that training sessions with the media in attendance have all been cancelled and we are having to make other arrangements.”

The three people who tested positive were part of the team with state TV firm RAI – one journalist and two technicians – and are thought to have picked up the bug in London.

Two tested positive in London after having covered the semi-final against Spain earlier this week.

The third was diagnosed on their return to the Coverciano training camp.

Sources said that coach Roberto Mancini and the entire squad had all received their vaccinations.

Italy will be desperate no players have contracted the virus which would force them and any close contacts to self-isolate.

As a result, they could not travel to London and have any involvement in Sunday’s final at Wembley.

Italy are already without star left-back Leonardo Spinazzola who ruptured his Achilles in the quarter-final against Belgium.

Mancini’s side booked their place in the Euros showpiece by beating Spain on penalties following a 1-1 draw.

And the Three Lions joined them after seeing off Denmark 2-1 after extra-time at the home of football.

Meanwhile, it was confirmed today that Italy – unbeaten in 33 matches dating back to 2018 – will be using the facilities at Tottenham’s training ground in preparation for the crunch game.