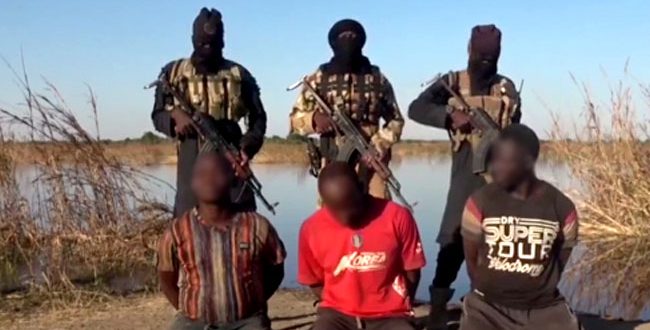 Screenshot from the video

A new video dated December 8, showing the execution of two Nigerian soldiers and a policeman has emerged online.

In the video, the killing was carried out by masked men believed to be members of the Islamic State of West African Province (ISWAP).

Those who were killed were reportedly abducted at a fake checkpoint in Benisheikh, a village seventy kilometers west of Maiduguri, Borno State capital.

It is not clear how many people were abducted, but the video only showed three tortured security personnel with their hands tied behind them.

They displayed their identity cards and introduced themselves as a mobile police sergeant, as well as a sergeant and a private soldier of the Nigerian Army.

However, police and army authorities have yet to confirm the identities of the slain men.

When contacted by Channels Television, the spokesperson for Operation Lafiya Dole, Colonel Ado Isa, said he is not aware of the attack or the video.

He, however, promised to reach out with details once obtained.

Before the killing, a masked man backing a river believed to be around the Lake Chad area spoke in Hausa language.

He threatened that the group would carry out ‘massive attacks’ on military formations and ambushes on the highways in the region.

“We are saying to the soldiers of Nigeria, we will never spare those fighting people practicing the religion of Allah. Because of that we shall attack your barracks, wallahi we shall block you on your roads. The story is, what you hear is not what you see; what lies ahead is tougher and uglier than this, Allahu Akbar,” he said.

Shortly before they were killed, the security personnel narrated that they were abducted from a village located few kilometers to Maiduguri.

Channels Television gathered that some of them were returning to the theatre of operation after a welfare pass to their mother base where they had gone to see their families.

Following the disbandment of most military checkpoints along the Maiduguri-Damaturu road, the insurgents, according to sources, now mount fake check points dressed in full military regalia.

The criminals also took advantage of the “Operation Positive Identification” exercise through which they identified their victims.

Last week, ISWAP had in a statement claimed that it abducted 14 “prisoners” on the same road, six of which were soldiers, two staff of the Red Cross and six others.

The Nigerian Army was silent on last week’s attack.