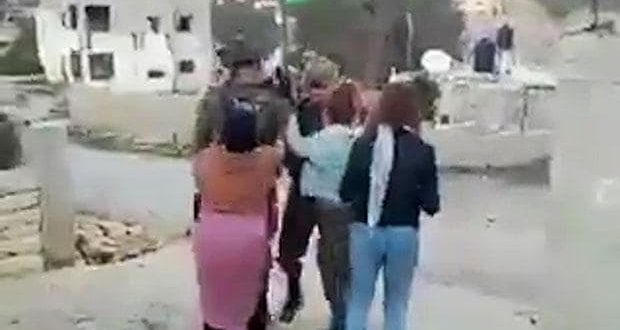 The heavily armed soldiers do not respond in the face of what appears to be an attempt to provoke rather than seriously harm them. They then move backwards.

The incident is believed to have taken place next to the house of one of the girls, 17-year-old Ahed Tamimi, in the Palestinian village of Nabi Saleh in the West Bank.

Early Tuesday the Israeli army raided Tamimi’s house and arrested her, her father Bassem said, accusing the army of seizing telephones, computers and other electronic equipment.

“They didn’t give a reason for her arrest,” Bassem told AFP. The Tamimi family are prominent campaigners against the Israeli military occupation of the West Bank, and a picture of Ahed as a child biting the hand of a soldier to try to stop the arrest of a brother became a symbolic image.

That picture and others resulted in her being received by the then Turkish prime minister Recep Tayyip Erdogan in 2012. Another family member, Mohammed, is recovering in hospital after being shot in the head with a rubber bullet Friday, the family said.

The video of Ahed and the soldiers was widely used by Israeli media, which often accuses Palestinian protesters of seeking to provoke the army into responses which are then filmed.

Intelligence Minister Yisrael Katz said on public radio he was “boiling with anger” when he saw the video. “But the soldiers did the right thing.” Education Minister Naftali Bennett said that Tamimi could face seven years in prison.

Previous Wife Of Nigerian Doctor Arrested For Having Sex With Her Student In The U.S
Next NNPC Says Fuel Queues Will Disappear By Weekend