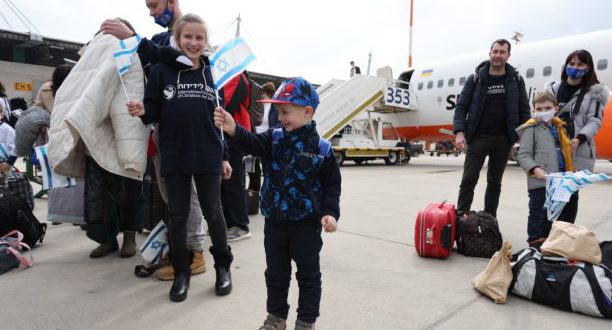 Israel’s government estimates that around 10,000 Ukrainians will immigrate to Israel in the coming weeks according to The Jerusalem Post.

“In light of the drastic increase in applications for immigration from Ukraine and in view of the security situation in the region”, the ministry said that Tamano-Shata and Finance Minister Avigdor Lieberman agreed on providing additional budgets to actualize the emergency immigration operation from Ukraine.

The Ministry of Immigration and Absorption convened an emergency discussion last Thursday during which Tamano-Shata assembled an inter-ministerial team to remove bureaucratic hurdles for potential olim and to issue immigration visas digitally, in light of a drastic increase in applications. This is in addition to reinforcements in the Absorption Division at Ben Gurion Airport and the cooperation with the IDF.

The Ministry concluded, “We call on the Jews of Ukraine to immigrate to Israel – your home.”

In the entire year of 2021, a total of 13,006 Jews made Aliyah from Eastern Europe to Israel. Therefore, 10,000 immigrants from Ukraine in one month is substantial and dramatic. As revealed by the Jerusalem Post, Israel offers fleeing Jews from Ukraine free shelter and meals. The Ukrainian Jews will be offered to stay in hotels for a time of two weeks till one month – with possibilities to extend this time further.