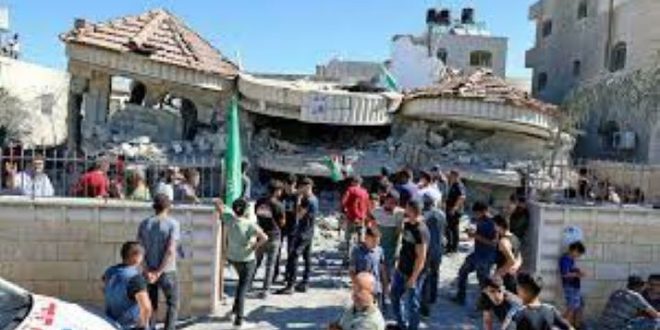 Palestinian villagers in the Israeli-occupied West Bank inspect the remains of the home of a US dual national, demolished by Israeli troops overnight to punish her estranged husband, who is accused of fatally shooting a Jewish student JAAFAR ASHTIYEH AFP

The Israeli army said Thursday it demolished the home of a Palestinian woman with US citizenship whose estranged husband stands accused of fatally shooting a Jewish student in the occupied West Bank.

“Overnight… troops demolished the residence of the terrorist [Montasser] Shalabi, in the village of Turmus Ayya, northeast of Ramallah,” an army spokesperson said.

The demolition comes despite US discouragement of the policy.

Shalabi, 44, was arrested by Israeli forces in May after he allegedly fired on waiting passengers at a bus stop at Tapuah junction south of Nablus in the northern West Bank. The attack killed Yehuda Guetta, 19, a student at a seminary in the Itamar settlement and wounded two of his friends.

Sanaa Shalabi, 40, told AFP troops arrived at 1:00 am to place explosives around her home. She said the demolition lasted through the night.

“This is our life. What happened to us is normal. We were prepared for it,” she said.

She called her husband a “hero”.

Montasser Shalabi did not live in the home that was destroyed, according to the Israeli human rights organisation Hamoked, which unsuccessfully contested its demolition before Israel’s Supreme Court.

Executive director Jessica Montell said the couple were estranged. Sanaa lived in the home with three of their seven children. The whole family are dual US nationals.

“The man accused of the attack doesn’t live in the house, he lives in the US and he comes once or twice a year,” Montell said.

Sanaa “was not in any way involved and didn’t know anything about the attack. We thought this should be grounds for not demolishing or just demolishing one room,” she added.

The US has expressed opposition to punitive home demolitions. A spokesman said the US embassy was “following” reports of the demolition.

“The home of an entire family should not be demolished for the actions of one individual,” the spokesman said.

The army said during the demolition “approximately 200 rioters hurled rocks and launched fireworks” at troops, who responded with “riot dispersal means”.

Charles Igbinidu is a Public Relations practitioner in Lagos, Nigeria
@https://twitter.com/ionigeria
Previous Tokyo to be put under state of emergency for duration of 2020 Olympic Games
Next Three rockets fired at US embassy in Baghdad: Iraqi army