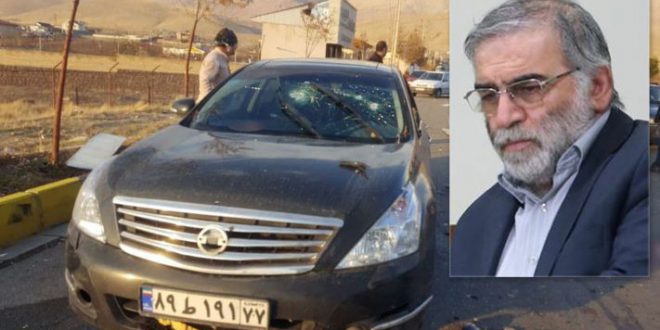 The scene of the attack that claimed the scientist's life. Pic: IRIB / EPA-EFE / Shutterstock

Iran’s top nuclear scientist was killed by a satellite-controlled machine gun, according to the country’s media.

Mohsen Fakhrizadeh died in hospital on 27 November after gunmen fired at his car near Tehran, in an ambush Iran‘s president has blamed on Israel.

He said that the gun fired 13 shots at Mr Fakhrizadeh but was so accurate that the scientist’s wife, who was sitting in the same car, was not injured.

“The gun was focused only on Martyr Fakhrizadeh, and his wife was not shot, despite being a few centimetres away,” he said.

“The head of the protection team was also shot four times because he threw himself on Fakhrizadeh, and no enemy was on the scene to shoot the guards.”