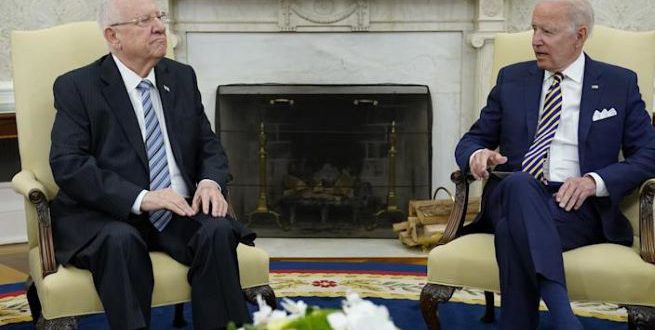 US President Joe Biden, in a meeting on Monday with Israeli President Reuven Rivlin, said that Iran will never get a nuclear weapon as long as he sits in office.

“Iran will never get a nuclear weapon on my watch,” Biden said.

“I just wanted to thank the president for being here,” said Biden at the beginning of their conversation at the Oval Office.

Biden assured Rivlin that his commitment to Israel “is iron-clad” and that he has an “unwavering commitment to [Israel’s] self-defense.”

“My team and I are already working closely with the Israeli government that took office earlier this month,” he said.

“I am looking forward to hosting Prime Minister [Naftali] Bennett at the White House very soon.”

Later on Monday evening, Speaker of the House Nancy Pelosi welcomed Rivlin on Capitol Hill to a meeting with a group of bipartisan lawmakers.

“The support for Israel in this Congress has always been strongly bipartisan, and it will continue to be so, because of our shared values and because of our mutual security concerns,” she told Rivlin at a photo opportunity.

On Tuesday, he will hold several meetings at the UN. First, he will meet with Secretary-General António Guterres, and later with 20 UN ambassadors, including those from Russia, the UK, the US, Bahrain and Morocco.

Rivlin also met with UAE Ambassador to the US Yousef Al Otaibi on Monday, thanking him for his “key role” in the Abraham Accords, in a tweet on Tuesday morning.

Meeting yesterday with UAE ambassador to the United States, Yousef Al Otaibi, who played a key role in advancing the Abraham Accords.

I thanked him for his work and said I would do everything possible to widen the circle of peace.

Rivlin is expected to return to Israel on June 30; his term ends a week later on July 7. He will be succeeded by outgoing Jewish Agency Chairman Isaac Herzog, who was elected earlier this month as Israel’s 11th president.

Biden and Rivlin also discussed regional issues, including the indirect Vienna negotiations to restore the 2015 nuclear agreement with Iran.

Biden is the third sitting US president that Rivlin will meet with, the other two being Donald Trump and Barack Obama.

“I am delighted to be here once again to meet the President of the United States,” Rivlin told Biden.

“Israel has no greater friend or ally than the United States of America. You are our best friends and we [share] values of democracy and liberalism.

“And, according to a real friendship, we can, from time to time, discuss matters and even agree not to agree on everything,” he said, hinting at the possibility of the renewal of the JCPOA.

“But we count on you,” Rivlin told Biden.

“Your declaration just now brought Israelis to understand that we have a great friend at the White House.”