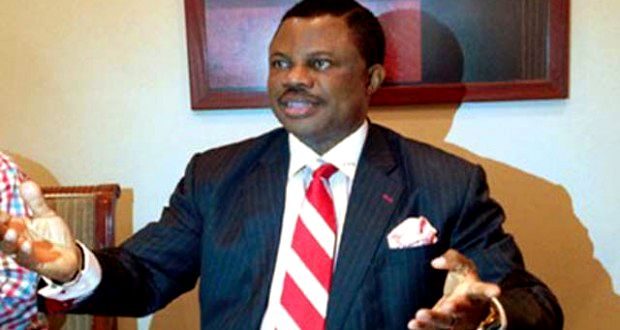 Scores of youths and women, suspected to be members of the Indigenous People of Biafra, on Sunday, attacked the Anambra State Governor, Chief Willie Obiano, at the St. Joseph Church, Ekwulobia,  Aguata Local Government Area of the state.

Our correspondent gathered that the governor attended a church in the area but had hardly settled down when some youths and women, who were adorned in Biafran insignias, chanting Biafra songs, besieged the gate of the church shouting, “No election in Anambra State; “we want referendum;” “no referendum, no election.”

Advancing in droves towards the gate of the church, the governor’s security men rushed and locked up the entrance.

A source stated, “As their (IPOB’) confrontation with the police continued, the IPOB numbers continued to enlarge. I think they were reinforcing from Onitsha. As their number continued to increase, the governor’s security (operatives) had to smuggle him out of the church.”

But a member of the governor’s press crew, who spoke on condition of anonymity, said the governor left after addressing the church at the end of the service.

The source stated, “The governor was not smuggled out of the church. The issue was that the security men had to stop the agitators at the gate of the church, when they started shouting ‘no election, no election.

“The governor even addressed the issue while speaking to the congregation. He assured them that there would be election in the state.

When contacted on the telephone, the Anambra Police Commissioner, Mr. Garba Umar, confirmed the incident, warning that the police would no longer tolerate such impunity.

He said the intension of the protesters was to attack the governor.

Garba added, “You press people should report this. We will no longer tolerate this impunity from anybody.

“Why should they protest to the church? The Church is a place of worship and not a place of protest. It is obvious that they had criminal intention to attack the governor.

“The police had to stop them at the gate. If they had dared my men, it would have been a different story. We can’t watch anybody breach public peace in this state. They should be warned to desist from this impunity.”

About two weeks ago, a group of youths, suspected to be members of IPOB, allegedly disrupted a church function attended by the governorship candidate of the Progressives Peoples Alliance, Mr. Godwin Ezeemo, at Odoekpe, Ogbaru LGA of the state.