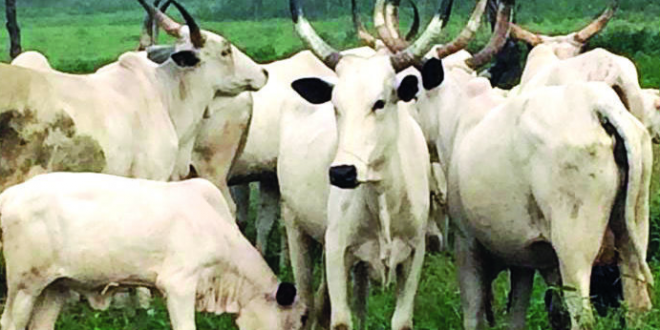 The Amalgamated Union of Foodstuff & Cattle Dealers of Nigeria Wednesday expressed its readiness to stop the transportation of livestock and foodstuffs to the South East.

The union was responding to a statement on Monday by the Indigenous People of Biafra (IPOB) banning the singing of the national anthem in schools and directing the people of the zone to stop consuming beef of imported cattle from the north.

In an interview with the BBC, Muhammad Tahir, the chairman of the union, described the directive as empty propaganda, saying “we’re tired of such rhetoric.”

He said: “We want a united Nigeria – one nation and one people; but if they (IPOB) deem it otherwise, then we’re okay for that.

“We’re not supplying impoverishment to them, rather we take delivery of our affluence to their region. We supply them with foodstuffs, not toxic substances.”

He said the southern population could not withstand even a day of food or meat blockage from the north.

It would be recalled that IPOB recently banned the singing of Nigeria’s national anthem in schools and the use of Fulani cows during festive seasons in the South East region.

Its Head, Directorate of State, Chika Edoziem, who made the announcement in Enugu,  urged IPOB members to prepare for a global protest with a focus on the British, Nigerian Embassy, Kenyan Embassy, and the United Nations.

He said IPOB would campaign for the unconditional release of Nnamdi Kanu, adding that the leadership of the group would pursue some of the programmes and actions vigorously in 2022.

Edoziem stressed that the group would sustain a worldwide campaign for the unconditional release of Onyendu Mazi Nnamdi Kanu (A Prisoner of Conscience).

“The campaign will be called the Prisoner Of Conscience Campaign. In furtherance of the campaign, all IPOB family members, Biafrans and friends of Biafra are urged to change their profile pictures on social media with the official campaign poster.

“Secondly, all IPOB families are directed to activate the earlier instruction passed to them. We shall embark on a worldwide protest in cities and capitals around the world,” he said.

“There are about three books that will be published this new year in furtherance of this. After the head of this department is made public, Biafran writers will be called upon to write books and educational materials to be published for our children in primary and secondary schools.

“Beginning from Monday, January 3, 2022, no more Nigerian national anthem in all schools in Biafraland. Our children must no longer be reminded daily that they are under oppression by singing the national anthem of the oppressor,” he added

Charles Igbinidu is a Public Relations practitioner in Lagos, Nigeria
@https://twitter.com/ionigeria
Previous Novak Djokovic Refused Entry Into Australia Over Vaccine Exemption
Next Pope Francis criticizes people who choose to have pets instead of children