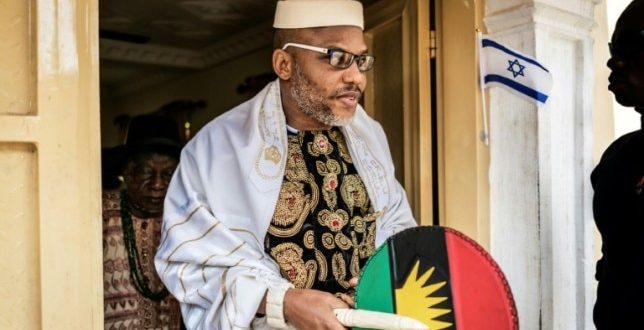 IPOB Leader Insists On Getting $800M Compensation From FG

Nnamdi Kanu, the leader of the proscribed Indigenous People of Biafra, is insisting on getting the sum of $800million from the Federal Government for trampling over his ‘unlawful detention.’

In a report by Punch, Kanu, through his lawyer, Ifeanyi Ejiofor, has said that despite being granted bail by the Federal High Court in Abuja, he is still entitled to the $800m compensation for his alleged unlawful arrest and detention in 2015.

Kanu is currently being prosecuted alongside others on charges of treasonable felony after declaring a state of Biafra in some south eastern states of Nigeria.

Ejiofor, on behalf of Kanu, made this known while responding to the motion filed by the Federal Government asking the Community Court of the Economic Community of West African States sitting in Abuja to dismiss a fundamental human rights enforcement suit filed by the IPOB leader.

On March 3, 2016, Kanu had filed the suit demanding $800m as compensation from the Federal Government for his alleged unlawful arrest in 2015 and detention.

The Federal Government, through its lawyer, Maimuna Shiru, filed its motion on November 13, stating that Kanu, who was granted bail by the Federal High Court in Abuja on April 25, 2017, and allegedly jumped bail, lacked the merit to enjoy the judgment of the ECOWAS Court on the suit as this would serve no purpose.

But Ejiofor, objected to the Federal Government’s motion contending that granting bail to the IPOB leader was just a partial satisfaction of prayers sought in the suit and that the ECOWAS Court had the power to grant his client the $800m compensation sought since the IPOB leader’s rights had been violated.

There have been series of controversies over Nnamdi Kanu’s whereabouts after the Nigerian army’s operation Python Dance.

IPOB had accused the Nigerian Army of ‘kidnapping’ Kanu after the alleged raid in the IPOB leader’s residence in September 2017.

However, the Chief of Army staff, Tukur Buratai claimed that his men never had contact with Kanu during the Operation Python Dance II exercise.